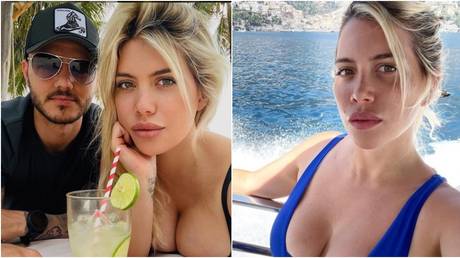 Mauro and Wanda Icardi's relationship is in the headlines. © Instagram @wanda_icardi

The couple have been together since 2014, with their union already embroiled in scandal before it got off the ground.

Wanda was married with three children to Argentine footballer Maxi Lopez from 2008 to 2013, and their relationship broke down with each party accusing the other of infidelity as Wanda was suspected of shacking up with his former Sampdoria teammate and off-field friend Icardi.

Returning to Buenos Aires from Italy, Wanda then struck up a relationship with the 28-year-old with a meeting between Sampdoria and Icardi’s new outfit Inter Milan dubbed the Wanda Derby as the pair refused to shake hands.

Wanda went on to marry Icardi in 2014 and has two children with him.

But on Saturday, she posted a cryptic story that accused someone believed to be Icardi of adultery by saying: “Another family you ruined for a slut.”

Furthermore, to fuel rumors that she has split from the former footballer she also represents as his agent while living in the French capital, Wanda has unfollowed him on the popular social media platform where she has 8.4 million followers.

🚨⚽️ | NEW: Wanda Icardi, Mauro Icardi’s wife, has posted an instagram story translating to “another family you ruined for a bitch”, and has also unfollowed Mauro Icardi on the platform pic.twitter.com/O9D5oBrDF5

Learning that Maxi Lopez has arrived in Paris through an Instagram story his girlfriend Daniela Christiansson posted, conspiracy theorists on the internet began to go into overdrive.

Additionally, popular Argentine journalist Ker Weinstein posted screenshots of messages that Wanda sent her seeming to confirm the pair have split up, that she has deleted all of their photos together, and has also stopped following ‘La China’.

“I hope they patch things up. There’s a woman who’s the third party in discordance. I’m in shock.”

The other woman, who Wanda also supposedly referred to, is believed to be the popular Argentine actress known as Eugenia ‘La China’ Suarez.

Like Icardi with Wanda and Lopez, Suarez is thought to have been a protagonist in the separation of her former partner Benjamin Vicuna Luco, a Chilean actor, and his Argentine model ex-wife Pampita with whom he had three children in 2015.

Suarez and Luco then went on to have two kids themselves, but are rumored to have separated this year.

Now it remains to be seen how the soap opera unfolds as more details emerge in the coming days and weeks.

Also on rt.com ‘Are we in 2021 or 1810?’ Football celebrity Nara launches feminist tirade after steamy Instagram snap removed (PHOTOS) (RT)