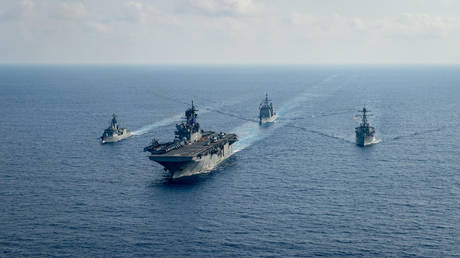 US and China military chiefs held meetings over video conference on October 28-29, Chinese Defense Ministry spokesman Wu Qian confirmed on Thursday. He stated that US Defense Secretary Mark Esper had denied reports that Washington was considering a drone assault on Chinese islands and reefs in the South China Sea.

Allegations of possible drone strikes were made by the Chinese media after the US military publicly showed off a simulated island assault exercise featuring a red silhouette of China on air personnel’s uniforms.

According to the MoD spokesperson, Esper claimed that Washington had no intention of creating conflict with China. Wu, however, added that Beijing would respond resolutely if provoked by an attack at sea.

We urge the US to walk the talk, keep its promise, and take measures to prevent provoking China military in the air and sea.

Wu said he hopes that the two militaries can play a role in bettering relations between Beijing and Washington, adding that both sides had agreed to strengthen communication, manage and control disparities, and cooperate in areas of common interest.

It was also reported that senior officials would speak again via video conference in November and December, discussing humanitarian aid and maritime security. (RT)