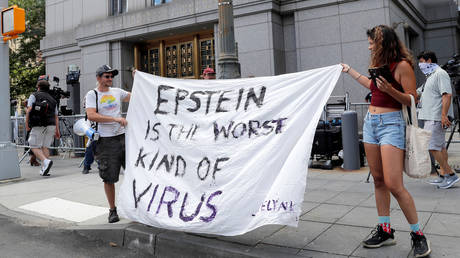 The US Virgin Islands Attorney General has subpoenaed 21 years’ worth of deceased pedophile Jeffrey Epstein’s flight logs, reportedly striking fear in the hearts of high-profile passengers not yet exposed as Lolita Express riders.

Passenger logs for Epstein’s four helicopters and three planes have been subpoenaed by Virgin Islands AG Denise George, who recently sued the disgraced financier’s estate for 22 counts including human trafficking, child abuse, neglect, prostitution, aggravated rape, and forced labor, according to a Sunday report by the UK Mirror.

Also on rt.com ‘Was he killed? Was it suicide?’ Trump wishes Ghislaine Maxwell better ‘luck’ in jail than Jeffrey Epstein

In addition to the passenger lists, George has requisitioned “complaints or reports of potentially suspicious conduct” and any “personal notes” the pilots made while flying Epstein’s alleged harem of underage girls around the world. She also wants the names and contact information of anyone who worked for the pilots – or who “integrated with or observed” Epstein and his passengers.

Epstein pilot David Rodgers previously provided a passenger log in 2009 tying dozens of politicians, actors, and other celebrities to the infamous sex offender – including former US President Bill Clinton, actor Kevin Spacey, and model Naomi Campbell. However, lawyers for Epstein’s alleged victims have argued that list did not include flights by Epstein’s chief pilot, Larry Visoski, who allegedly worked for him for over 25 years. (RT)

Unlike Armenia, Azerbaijan does not target civilians and civilian objects – Hajiyev

Since the start of the counter-offensive operations by the Azerbaijani Army, much fake news against…

Migration Agency appeals to foreigners and stateless persons in Azerbaijan

Armenia’s war against civilians, particularly against children going on”, Assistant of the President of the…

Gubadli region is under artillery fire from the territory of Armenia

The Armenian Armed Forces, who lost combat positions and was forced to retreat, subjects the…

Ilham Aliyev: We’ll go all the way to liberate all the occupied territories

“We are ready to stop the war today. I have been saying this since October…

Leonid Kuchma, Former President of Ukraine and Abraham Foxman, Vice Chair of the Board of…