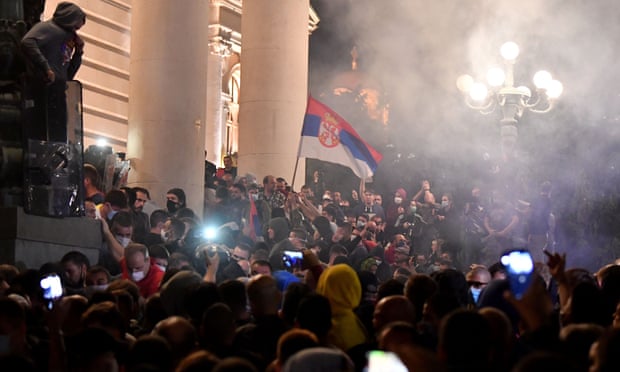 Protesters and police clashed violently in Belgrade on Tuesday evening amid anger over the return of strict lockdown measures to tackle coronavirus. Earlier on Tuesday a weekend curfew was announced after a rise in Covid-19 cases in Serbia and across the western Balkans.

In Serbia, angry protesters spilled out in the streets of Belgrade and tried to storm parliament after health officials reported the highest single-day death toll of 13 amid 299 new COVID-19 cases. Protesters hurled rocks, bottles and other objects and set fire to five police vehicles while video footage of the clashes showed police beating up some demonstrators.

Around two dozen demonstrators have been arrested while a law enforcement official said authorities are trying to identify more people who took part in the rioting.

Serbia President Aleksandar Vukic’s concession that easing virus restrictions too soon possibly led to an infection spike recast the global dilemma of when to open up and by how much without igniting another virus flare-up.

Many blame the autocratic Serbian leader for lifting the previous lockdown measures just so he would cement his grip on power after parliamentary elections. He has denied those claims.

Belgrade’s virus resurgence reflected a general trend in the Balkans where infections are keeping a high trajectory. In Albania, 50-70 new cases are reported every day — many times over the daily number of infections reported during the country’s lockdown through March and April.