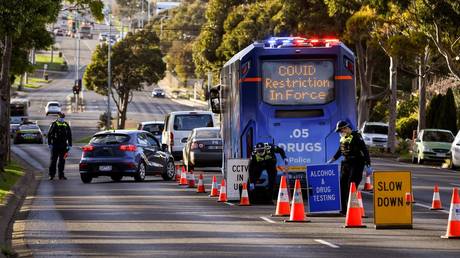 Police at a checkpoint in the locked-down suburb of Broadmeadows in Melbourne on July 2, 2020. ©  AFP / William West

Victoria’s Premier Daniel Andrews has denied claims that his Covid-19 restrictions played a role in the tragic deaths of four newborns who failed to receive urgent medical care, contradicting testimony from a government inquiry.

Four babies died in Adelaide, South Australia in the past four weeks after they could not be airlifted to Melbourne’s Royal Children’s hospital, purportedly due to the draconian measures imposed on the city by Andrews. The four newborns needed emergency heart surgery that they apparently couldn’t receive treatment for locally.

The South Australian parliament’s public health services committee held an inquiry on Tuesday to determine why the babies didn’t receive the care they needed. A professor who testified at the hearing said that due to Melbourne’s coronavirus restrictions, transporting patients to the hospital was “no longer tenable.” One of the four deaths was reported to the committee shortly after the inquest.

The Australian newspaper reported the families of the infants were told that their children were not permitted to enter Victoria for the operations under the state’s strict stage-four lockdown rules.

Also on rt.com Doctors in Australia demand end to Victoria lockdown while WHO says restrictions should not be primary course

During a press conference on Wednesday, Andrews deflected blame for the newborns’ deaths. He said that his government’s health authorities told him that they did not prevent the children from being transported to Melbourne.
(RT)