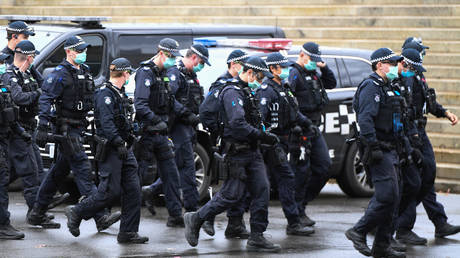 Police at an anti-lockdown protest in Melbourne, Australia. ©AAP Image/Erik Anderson via REUTERS

Civil liberties groups and legal professionals are sounding the alarm in the Australian state of Victoria over the proposed Omnibus (Emergency Measures) Bill, which would afford government officials the powers to arrest citizens.

The bill has been proposed by Victorian Premier Daniel Andrews and would also allow government officials to arrest people they suspect may spread the coronavirus through planned future action, such as anti-lockdown protesters.

Public servants, union officials, or any other government staff such as protective services officers and WorkSafe inspectors could be drafted in to enforce public health directions pertaining to the coronavirus pandemic, should the bill pass the upper house of Parliament in the state.

Also on rt.com Australia should be ashamed & appalled by this video of police handcuffing a pregnant woman for posting an anti-lockdown message

These health directives include limits on the size of gatherings, as well as Melbourne’s 9pm curfew, and would target those suspected of spreading the coronavirus, even if they’ve not committed a crime, Covid-19-positive patients or their close contacts who refuse to comply with instructions to self-isolate, those who choose to protest publicly, or even those with mental health issues.

An open letter signed by 14 retired judges and barristers has lambasted the plan as “unprecedented, excessive, and open to abuse,” citing the fact that there is “no requirement that persons authorised be police officers, or even public servants.” 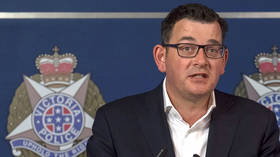 “It will allow Dan Andrews to effectively appoint anyone he wants as an authorised officer, with extraordinarily broad discretion to enforce Victoria’s emergency powers,” says Gideon Rozner, Director of Policy at free market think tank the Institute of Public Affairs.

He’s among those warning that, should the legislation be passed, union leaders might be able to target smaller businesses who oppose lockdown measures, enforcers could be weaponized against political opponents, and Andrews’ supporters “could be appointed to spy on their friends and neighbours.”

Some have gone so far as to dub the proposed additional force the “Dan Andrews’ Stasi,” comparing it to the East German secret police force that operated between 1950 and 1990.