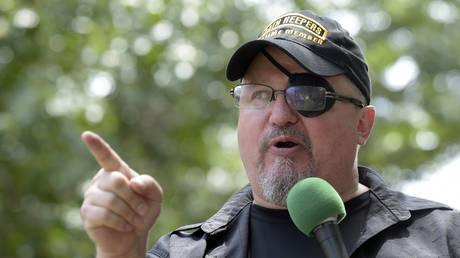 Oath Keepers Stewart Rhodes and Kelly Meggs have been found guilty of the rare charge, while three others were acquitted FILE PHOTO. Stewart Rhodes speaks during a rally in Washington in 2017. © AP Photo / Susan Walsh

A federal jury in Washington, DC has found Stewart Rhodes, the founder of Oath Keepers, guilty of seditious conspiracy in connection with the January 6 riot at the US Capitol. Kelly Meggs, the leader of the right-wing militia’s Florida chapter, was also convicted of the Civil War-era criminal offense, while three others were acquitted.

All five defendants, including Kenneth Harrelson, Jessica Watkins and Thomas Caldwell, were convicted of obstructing an official proceeding, with mixed verdicts passed on a handful of other less serious charges against them. The verdicts were announced on Tuesday after three days of jury deliberation.

The prosecution’s case relied on hundreds of messages and tapes involving the group, dating from the months prior to the riot. According to those records, Rhodes, a Yale Law-educated former paratrooper, told Oath Keepers that Joe Biden had not beaten Donald Trump at the ballot box and would be a puppet of China if he took office. He also predicted that a civil war would soon break out in the US and that the Oath Keepers should be prepared for it.

Two militia members who cooperated with the federal government told the court that the group had an armed rapid response team stationed at a hotel in Virginia, which was ready for deployment to Washington at short notice. 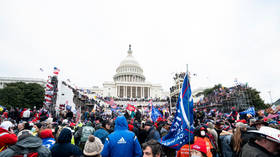 The defense argued that having such a team was a routine practice for the militia during mass gatherings. Oath Keepers, which recruited among military and law enforcement veterans, purports to provide security during rallies from possible attacks by left-wing extremists.

The witnesses confirmed that Rhodes had never ordered his associates to storm the Capitol. But the prosecution argued that Oath Keepers had an implicit understanding that Biden had to be denied the presidency by all means and that the riot had offered them an opportunity to act.

Watkins, a transgender woman who agreed to testify during the trial, said she was “swept in the moment” during the breach. She admitted liability on an obstruction charge against her. Two of the five defendants, Rhodes nor Caldwell, a disabled veteran, never entered the Capitol.

It was the first of three scheduled trials on the most consequential seditious conspiracy charges linked to the January 6 events. Proceedings against four other Oath Keepers and members of another right-wing group, Proud Boys, are scheduled for December. (RT)