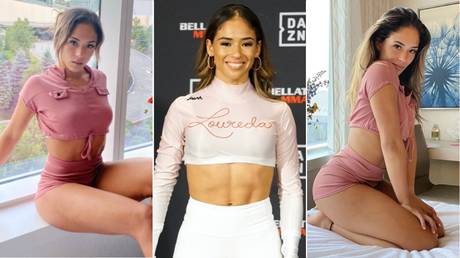 Bellator MMA starlet and Instagram favorite Valerie Loureda makes her return to the cage this Friday night at Bellator 243 but, as she explained to her fans on Instagram, she has had to go into isolation before fight night.

Miami’s Loureda is scheduled to kick off the action at the Mohegan Sun Arena in Uncasville, Connecticut on Friday night when she takes on Tara Graff as the former taekwondo ace looks to register her third successive win as a professional MMA fighter.

Loureda kicked off her career with a stunning finish of Colby Fletcher at Bellator 216 in February 2019, then followed up with a unanimous decision victory over Larkyn Dasch at Bellator 222 the following June.

However, the COVID-19 pandemic halted “Master” Valerie’s momentum as she was forced to sit tight while Bellator MMA went on hiatus during the coronavirus outbreak. However, Bellator are now back up and running, and Friday’s event, Bellator 243, represents a chance for Loureda to get back into the cage and show her latest improvements as she looks to climb the flyweight ladder.

It hasn’t been a normal fight week for Loureda, however. Bellator’s COVID-19 protocols mean that she has had to spend time quarantined in a hotel in Uncasville ahead of her fight.

And, with little else to do to pass the time, the photogenic flyweight decided to take some pics and share her experience with her 246,000 followers on Instagram with the caption, “Quarantined before war.”

Loureda later shared a photo as she started her final weight cut ahead of Thursday’s weigh-ins as she looks to get her five-foot-four frame down to the non-contract flyweight limit of 126 pounds.

With access to communal saunas a non-starter for fighters during the current pandemic, Loureda hopped inside her portable sauna and zipped herself up to sweat off a few pounds as she looks to get fully prepared for the “fight before the fight” as she weighs in for her matchup.