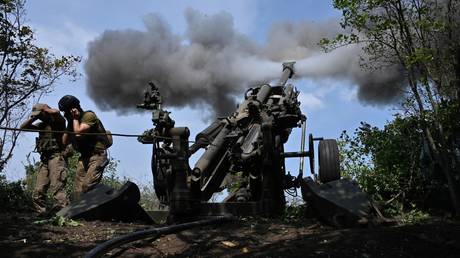 According to Beijing’s ambassador in Moscow, in this way Washington is seeking to “exhaust and crush Russia” Ukrainian artillerymen fire a US-made M777 howitzer on August 1, 2022, on the frontline in Kharkov Region, Ukraine. © AFP / Sergey Bobok/AFP

Washington is seeking to prolong the conflict in Ukraine as much as possible in order to weaken Moscow, China’s ambassador to Russia has suggested.

In an interview with Russia’s TASS news agency published on Wednesday, Zhang Hanhui said, among other things, that it was the US that had initiated “five rounds of NATO’s eastward expansion, directed the ‘color revolution’ in Ukraine’ and ‘driven Russia into a corner’ in terms of security.” According to the diplomat, all these factors combined led to the current conflict in Ukraine.

He went on to describe the US as the “initiator and chief arsonist of the Ukraine crisis.”

Zhang claimed that by slapping Moscow with “unprecedented” sanctions and providing Kiev with yet more weapons, Washington is seeking to prolong the armed conflict for as long as possible. This strategy is aimed at “exhausting and crushing Russia” eventually.

The Chinese ambassador noted that he saw parallels between the conflict in Ukraine and the latest escalation around Taiwan. He alleged that the White House is deploying the kind of tools it previously used in the Eastern European country.

According to the diplomat, the fact that the US is “flexing its muscles” on China’s doorstep, arranging “various anti-China groups, and has now openly crossed all borders on the issue of Taiwan” just goes to prove his assessment. He dubbed this as nothing short of an “Asian-Pacific version of ‘NATO’s eastward expansion’.”

The envoy pointed out that the US is pursuing effectively the same goals with respect to China as it is vis-à-vis Russia – to “hinder the development and rise of China, interfere in its internal affairs” as well as to “exhaust and contain it with the help of war and sanctions.” (RT)