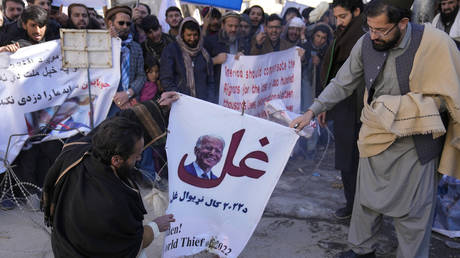 Prominent economists from the US and elsewhere have called on Washington to return frozen central bank funds to Afghanistan FILE PHOTO: Afghans protest US President Joe Biden’s decision on frozen Afghan assets in Kabul, Afghanistan, on February 15, 2022. © AP / Hussein Malla

Washington should release the assets of the Afghan Central Bank it froze last year after the Taliban takeover and return them to the Afghan people, a group of more than 70 renowned economists said in an open letter on Wednesday.

The economists and academics from the US, the UK, India, France, Canada, Australia, and Brazil said they were “deeply concerned” by the “economic and humanitarian catastrophes unfolding in Afghanistan” and the role America played in “driving them.”

After the Taliban takeover in August 2021, the US blocked $7 billion in the Afghan Central Bank’s foreign exchange reserves stored at the Federal Reserve Bank of New York. Another $2 billion were frozen by the UK, Germany, the UAE and some other nations.

The frozen assets are “critical” to the functioning of the Afghan economy, including the facilitation of food and oil imports, on which the nation heavily relies, the open letter addressing President Joe Biden and US Treasury Secretary Janet Yellen said. 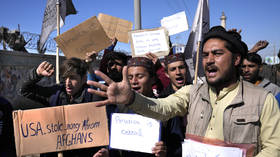 Now, around half of the Afghan population faces “acute food insecurity,” the economists warned, adding that, although there are several factors that led to the dire economic situation in Afghanistan, the asset freeze by the US and its allies “in particular has contributed mightily to Afghanistan’s economic collapse.” (RT)