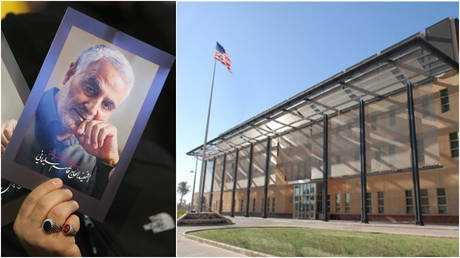 Washington is set to pull diplomatic staff from its embassy in Baghdad in an effort to “minimize risk” as the one-year anniversary of the US kill strike on Iranian general Qassem Soleimani approaches, according to several reports.

The officials offered few details about the partial withdrawal, saying only that it would be “slight” and “temporary,” with one indicating the staff would return only after the January 3 anniversary of the Soleimani killing. Of the hundreds of diplomatic staff members stationed at the embassy, it is unclear how many will leave for the rollback.

“It’s a minor drawdown based on security reservations from the US side. They could come back – it’s just a security blip,” a senior Iraqi official told AFP on condition of anonymity, adding that the move did not signal any blow to the relationship between Baghdad and Washington.

We knew ahead of time, and top diplomatic staff, including the ambassador, are staying, so this is not a rupture of diplomatic ties.

The State Department declined to confirm the reported “de-risking” operation, instead stating that it “continually adjusts its diplomatic presence at Embassies and Consulates throughout the world in line with its mission, the local security environment, the health situation, and even the holidays.” However, a spokesperson added that Ambassador Matthew Tueller remains in the country, and that the embassy would continue to operate. (RT)