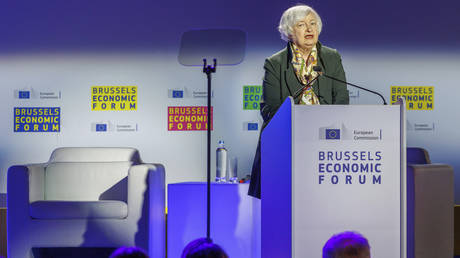 The US and its allies must pay Ukrainian wages and foot the bill for reconstruction, Treasury Secretary Janet Yellen declared Janet Yellen delivers a lecture at the Brussels Economic Forum 2022 in Brussels, Belgium, May 17, 2022 © AP / Olivier Matthys

Treasury Secretary Janet Yellen called on Tuesday for the US’ allies to pay Ukrainian wages and rebuild infrastructure in the war-torn country. Deeming the billions of dollars already committed by the US and Europe insufficient to keep Ukraine afloat, Yellen declared that Kiev will eventually need “massive support” on the level of the post-WWII Marshall Plan.

With US lawmakers poised to approve a $40 billion package of military and economic aid to Ukraine and the US government agencies involved there, Yellen addressed the Brussels Economic Forum on Tuesday to persuade European leaders to open their wallets for Kiev.

Read more:   US reported highest annual death toll in 2020 due to COVID

“I sincerely ask all our partners to join us in increasing their financial support to Ukraine,” she said.

Ukraine needs budget funding to pay soldiers, employees and pensioners, as well as to operate an economy that meets its citizens’ basic needs.

The EU will soon have committed four consecutive €500 million ($520 million) packages of military aid to Ukraine since February, and €1.2 billion ($1.26 billion) worth of emergency loans since January. However, the Ukrainian government claims to need around $5 billion per month to keep the country’s economy alive.

“What’s clear is that the bilateral and multilateral support announced so far will not be sufficient to address Ukraine’s needs, even in the short term,” Yellen declared. (RT)