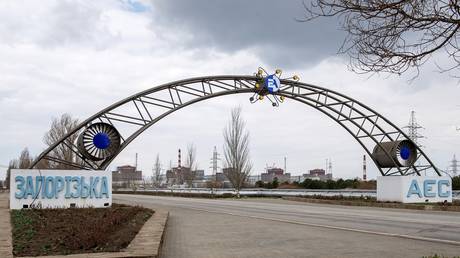 File photo: Entrance to the Zaporozhye nuclear power plant in Energodar, May 2022 ©  Sputnik

The US State Department on Thursday officially endorsed Ukraine’s demand for a demilitarized zone around the Zaporozhye nuclear power power plant (ZNPP), demanding the withdrawal of Russian troops that control the area. A statement from Foggy Bottom came as the UN Security Council was meeting on Moscow’s request to discuss the alleged Ukrainian artillery attacks on the facility, which Russia says may result in a radioactive disaster.

“Fighting near a nuclear plant is dangerous and irresponsible – and we continue to call on Russia to cease all military operations at or near Ukrainian nuclear facilities and return full control to Ukraine, and support Ukrainian calls for a demilitarized zone around the nuclear power plant,” a State Department spokesperson said in a statement.

UN Secretary-General Antonio Guterres also requested a demilitarized zone on Thursday, urging both Russia and Ukraine to “withdraw any military personnel and equipment from the plant and refrain from any further deployment of forces or equipment to the site.”

On Wednesday, the US and its G7 allies demanded of Russia to “immediately hand back full control” of the ZNPP to Ukraine and enable International Atomic Energy Agency (IAEA) personnel to access the facility, but made no mention of a demilitarized zone. (RT)