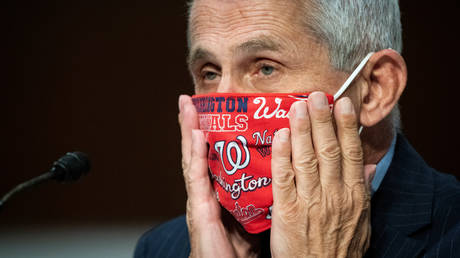 Unlike countries in Europe, the US failed to get the first wave of Covid-19 under control and is now ‘knee-deep’ in a new surge of it, according to the country’s top epidemic adviser Anthony Fauci.

The coronavirus situation in the US is “not very good,” Fauci said in an interview with National Institutes of Health Director Francis Collins on Monday. In less than two weeks, the number of new Covid-19 cases in the country has doubled and reached record numbers, with a spike of over 57,000 recorded last week. Some people have called this a second wave of the disease, but Fauci said that was not the case.

“We are still knee-deep in the first wave of this. And I would say this would not be considered a wave; it was a surge, or resurgence, of infections superimposed on a baseline that never got down to where we wanted to go,” Fauci said.

The situation in Europe is quite different, he added, saying that European nations have managed to take their first wave of Covid-19 under control and push its spread down to the baseline.

Now they’re having little blips, as you might expect, as they try to reopen. We went up, never came down to baseline, and now we’re surging back up.

Fauci stressed that the situation needs to be addressed immediately. He said that, while measures may vary for different localities, his general advice remains the same: keep a distance between people, avoid crowds, wear masks when going outside, wash your hands often, and if you organize a social function keep the number of guests small and try to hold it outdoors.

“Those are fundamental, and everybody can do that right now,” he said. (RT)