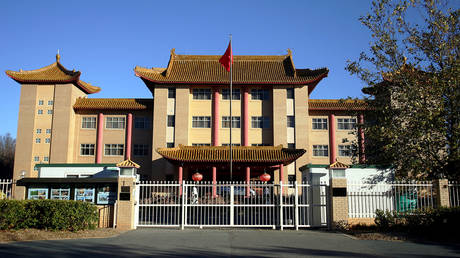 The United States has called China’s use of a digitally manipulated image of an Australian soldier a “new low,” after Beijing rebuffed Canberra’s calls for an apology.

The fabricated image is the latest attack by the Chinese Communist Party (CCP) on Australia and “another example of its unchecked use of disinformation and coercive diplomacy,” the US State Department said on Wednesday.

“This is a new low, even for the Chinese Communist Party,” deputy spokesman Cale Brown said, backing Washington’s Australian partners.

The CCP’s “hypocrisy is obvious to all,” the State Department’s spokesman said. “While it doctors images on Twitter to attack other nations, the CCP prevents its own citizens from reading their posts.”

Brown stressed that, while the CCP “spreads disinformation,” it also “covers up its horrendous human rights abuses, including the detention of more than a million Muslims in Xinjiang.” Beijing has repeatedly denied such allegations.

The US spokesman accused the Chinese leadership of seeking to distract attention from that issue so as “to avoid accountability.” (RT)