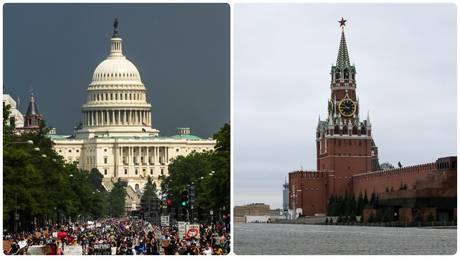 The “terrible” state of relations between the US and Russia is not what other nations expect from the two countries with the world’s biggest nuclear arsenals, a Kremlin spokesman has said.

“Our relationship remains at almost-bottom point. The situation is terrible both in bilateral aspects and in terms of our responsibility for multilateral affairs, first of all, in arms control and strategic stability,” Dmitry Peskov said in an interview with Russian TV.

He noted that “shy” expert contacts between the two nations have been failing to preserve strategic arms control agreements, like the now-defunct Intermediate-Range Nuclear Forces Treaty (INF), which was scrapped on Washington’s call last year.

The US has been working on dismantling arms control mechanisms for years. The Anti-Ballistic Missile Treaty was scrapped under George W. Bush, purportedly to protect the US and its allies from possible attacks by Iran and North Korea.

The INF was axed after the US accused Russia of failing to meet its obligations under the pact. Moscow denied these accusations and said they were simply being used as a pretext to shift responsibility for an escalatory move, which the US didn’t want to own. (RT)