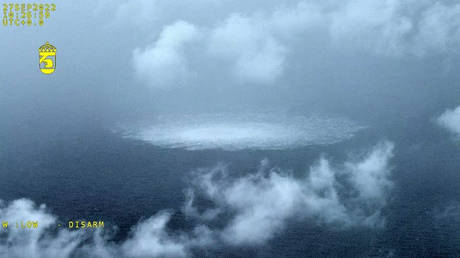 File photo: Gas emanating from a leak on the Nord Stream 2 pipeline in the Baltic Sea on September 27, 2022 ©  Swedish Coast Guard/Handout via Getty Images

Bloomberg hosts scrambled to stop Jeffrey Sachs as he laid blame for the pipeline explosion File photo: Gas emanating from a leak on the Nord Stream 2 pipeline in the Baltic Sea on September 27, 2022 © Swedish Coast Guard/Handout via Getty Images

Economist Jeffrey Sachs speculated on Monday that the sabotage of the Nord Stream pipelines was the work of the US and maybe Poland, to the chagrin of Bloomberg TV hosts who quickly tried to change the subject. Now a professor at Columbia University, Sachs became notorious in Russia for masterminding the “shock therapy” reforms in the 1990s – but has been sharply critical of the West’s approach to the conflict in Ukraine in recent months.

Invited to Bloomberg’s ‘Surveillance’ show on Monday, Sachs was asked to comment on Russia he “knew so well” under President Boris Yeltsin. Instead, the hosts scrambled to cut him off after he said the conflict is “on the path of escalation to nuclear war” and did not start in February 2022.

“Most of the world doesn’t see it the way we describe it,” Sachs told Bloomberg’s Tom Keene, at which point co-host Lisa Abramowicz tried to change the subject to inflation in Europe.

Columbia Univ.’s Jeffrey Sachs: “The destruction of the Nord Stream pipeline, which I would bet is a U.S.-Poland action [because] first of all, there is direct radar evidence that U.S. military helicopters that are normally based in Gdansk were circling over the area …” pic.twitter.com/rGZ6VhlvPq

The EU is in a “very sharp economic downturn,” Sachs agreed. The continent was “getting hammered” by energy shortages, made worse by “the destruction of the Nord Stream pipeline which I would bet was a US action – perhaps US and Poland,” he managed to add before Keene cut him off, asking for evidence of that claim.

Read more:   Russians told how not to fall victim to 'old hag' syndrome

“Well first of all, there’s direct radar evidence that US helicopters, military helicopters that are normally based in Gdansk, were circling over this area. We also had the threats from the US, earlier in this year, that ‘one way or the other, we are going to end Nord Stream.’ We also have the remarkable statement by [US] Secretary [of State Antony] Blinken last Friday in a press conference; he says ‘this is also a tremendous opportunity.’ Sorry, it’s a strange way to talk if you’re worried about piracy on international infrastructure of vital significance,” Sachs retorted. 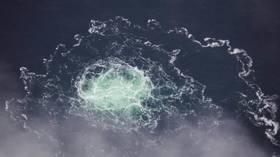 Western media says Russia blew up Nord Stream. But why would Moscow destroy pipelines it spent billions of dollars building?

“I know this runs counter to our narrative, you’re not allowed to say these things in the West, but the fact of the matter is – all over the world, when I talk to people, they think the US did it,” he added.

Read more:   Georgia to import flour from Russia through Azerbaijan

Abramowicz again tried to change the subject, saying Bloomberg couldn’t provide “counterbalance” to what he was saying. Undeterred, Sachs answered the next question by describing the current situation as “the most dangerous moment since the Cuban Missile Crisis” in 1962, with the US picking fights with both Russia and China, without any attempts to de-escalate things.

Currently director of the Center for Sustainable Development at New York’s Columbia University, Sachs gained notoriety among the Russians for his “shock therapy” reforms in 1991-1993. The overhaul of the entire Soviet economy ended up destroying the lives of millions of Russians and handing the country’s wealth over to a handful of oligarchs. (RT)