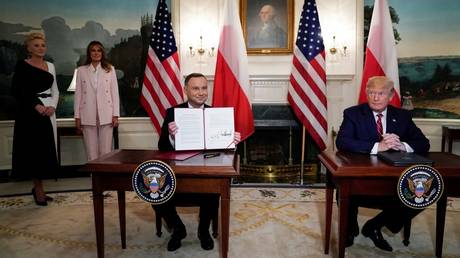 President Donald Trump confirmed that the US and Poland have signed a “joint declaration” to advance military cooperation, including buying F-35 fighters, and signed a $8 billion contract for US liquefied natural gas.

Ahead of the joint press conference with Polish President Andrzej Duda on Wednesday, a F-35 conducted a flyover above the White House, in a stunt meant to celebrate Warsaw’s decision to purchase 32 of the US-made jets.

Trump spoke of the “unbreakable bonds” between the two countries, which, he said, were bound by “deep common values” and “shared goals.”

Earlier during an Oval Office meeting with Duda, Trump said that about 2,000 additional US troops could be moved to Poland from another location in Europe, but said no final decision was made. Duda said he hoped the US military presence in Poland would be enduring and would increase gradually. (RT)