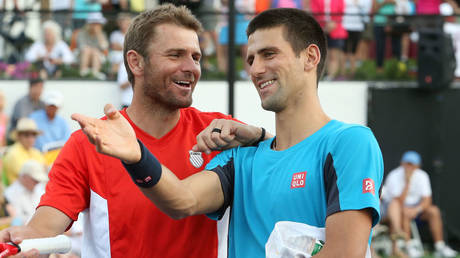 The embattled world number one is being manipulated by the Australian government over his visa fiasco, according to a former opponent Mardy Fish (left) and Novak Djokovic © Jesse Grant / WireImage

Leaders are using Novak Djokovic’s visa cancelation nightmare as a weapon, an American ex-contender has warned while urging the public that his Covid vaccine row is a ploy – and tennis provocateur Nick Kyrgios agrees with him.

Former world number seven and frequent Djokovic rival Mardy Fish is baffled by the treatment dished out by Australian officials to the world number one, who is awaiting a court hearing on Sunday to decide whether he will be forced to leave the country.

The retired star has urged people to show humanity towards the detained Serbian icon, arguing that the exhaustive row over whether Djokovic should have taken a Covid vaccine to allow him to enter unchallenged is irrelevant in the scheme of what he sees as clear political point-scoring.

Australia has had some of the strictest lockdown rules in the world, and critics of Prime Minister Scott Morrison’s administration have claimed that it is making a show of Djokovic to assert its power and push people into taking vaccine shots. (RT)