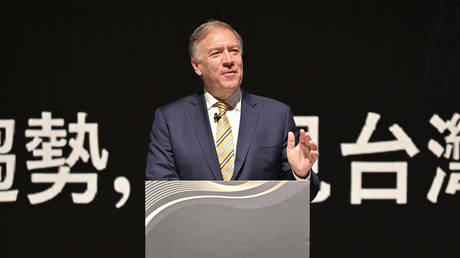 The US must abandon the “old paradigm of blind engagement” in its relations with Beijing if it wants to prevent Xi Jinping’s dream of a “Chinese century,” former US state secretary Mike Pompeo warned during a four-day visit to the self-governing island of Taiwan.

Speaking at the first Global Business Forum in Kaohsiung on Tuesday, Pompeo criticized the Biden administration’s “muddled and confusing” comments on how it would respond to a Chinese attack on Taiwan, the South China Morning Post reported.

“America must admit the hard truth. If we want a free 21st century, and not the Chinese century – the century which Xi Jinping dreams up – the old paradigm of blind engagement must end,” he urged.

Washington must engage with Beijing on “the terms of freedom,” Pompeo said, calling on the US and its allies to pursue “strategic decoupling with China,” which he called a “repressive adversary.”

Pompeo, who also served as director of the Central Intelligence Agency, has long been one of the most vocal critics of the Chinese government, and was seen as one of the key architects of Washington’s hawkish stance towards Beijing during Donald Trump’s presidency. 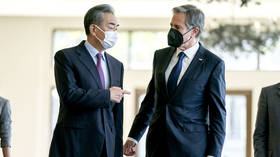 China warns US about ‘attitude’

China, meanwhile, has urged the US to change its attitude if the two countries wish to get along on the world stage. Chinese Foreign Minister Wang Yi told his US counterpart Antony Blinken last week that Sino-American relations were at a “critical juncture” and insisted that both sides must find a way to cooperate in a “responsible attitude towards the world.”

“We hope that the US will correct its perception of China… and stop trying to deal with the Chinese from a position of strength,” said Wang.

Tensions between Washington and Beijing have been on the rise since US House of Representatives Speaker Nancy Pelosi became the highest-ranking US official to make a trip to the self-governing island of Taiwan last month despite China’s repeated warnings against it.

Wang has stated that if Washington continues to interfere in Taiwan, which Beijing considers part of its territory, it would be an affront to China’s sovereignty. He further added that any pledge to defend the island in the event of Beijing deciding to reclaim it would send a “very wrong and dangerous signal.” (RT)