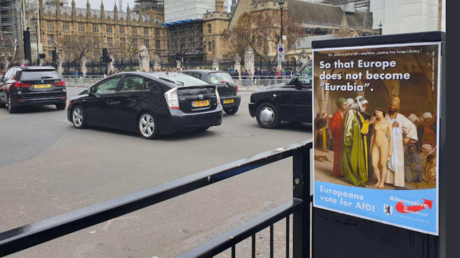 A museum in Williamstown, Massachusetts is calling on Germany’s Alternative für Deutschland (AfD) party to take down anti-Islamic and anti-immigration election posters bearing one of its artworks.

The 19th century painting, ‘Slave Market’, held by the Clark Art Institute, depicts a naked white woman being examined by dark-skinned slave traders and has been printed on European election campaign posters by the German right-wing party. A slogan above the striking image says: “So that Europe won’t become ‘Eurabia!’ Europeans vote for AfD.”

Apart from Germany, some of the posters have also been put up in London. (RT)