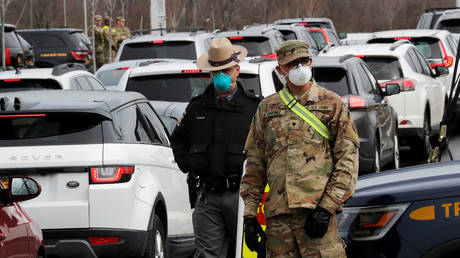 US Military personnel and police stand amid a line of cars of people arriving for testing at a drive-thru coronavirus disease testing center in Staten Island New York. © Reuters / Mike Segar

The head of Iran’s elite Revolutionary Guards has advised the US to focus on the epidemic at home instead of trying to undermine Tehran, as the strife between two nations persists, despite each having been hit hard by Covid-19.

The American leadership should “really care about the lives of their people in New York and the states involved with coronavirus rather than thinking about Hollywood scenarios and killing people in Iraq,” Major General Hossein Salami, Chief Commander of Iran’s Islamic Revolutionary Guards Corps (IRGC), pointed out.

He was referring to the assassination of Iran’s General Qasem Soleimani in a US drone strike in the Iraqi capital, Baghdad, in early January. The rash move by Washington put the US and Iran on the brink of an all-out war, with Tehran retaliating by firing missiles at US bases in Iraq. The Americans were warned of the attack beforehand, which allowed them to avoid fatalities, but Iran was still able to show that American military facilities in the region were within its reach. (RT)