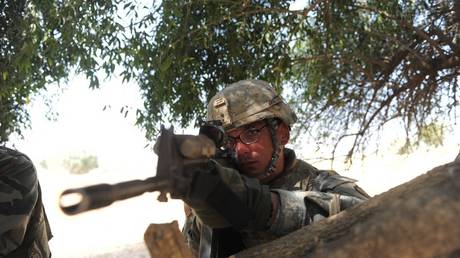 The joint drills with India are said to focus on high-altitude warfare, and come amid heightened tensions between Washington and Beijing FILE PHOTO: A US soldier aims his assault rifle while participating in the Yudh Abhyas 2012 military exercise in Rajasthan, India, March 13, 2012 © AFP / Sam Panthaky

The American and Indian militaries will hold joint exercises in the Himalayan mountains in October, less than 100km from India’s disputed border with China, CNN reported. The location was announced amid heightened tensions between the US and China over Taiwan, while India and China have been clashing along their mountain border.

The drills will be held in mid-October near the town of Auli in the Indian state of Uttarakhand, an Indian army officer told CNN on Saturday. Auli sits on the southern slopes of the Himalayas, and the exercises will focus on warfare at an altitude of 10,000 feet (3,000 meters).

Auli is also situated around 95 kilometers (59 miles) from the Line of Actual Control, a loosely-defined border that divides India and China. While both sides claim territory on the other side of this line, it has served as the de-facto border between the two countries since the end of the 1962 Sino-Indian War.

Fighting broke out along this line in 2020 after China objected to India’s construction of a road in its claimed territory. India said that it lost around 20 troops, while China claimed to have lost four. (RT)