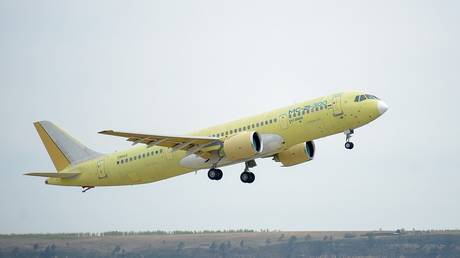 The Trump administration is planning to designate 89 Chinese and 28 Russian entities as “military end-users,” restricting American companies from doing business with them, Reuters reported citing a draft document.

If the list is published, US suppliers will have to obtain special licenses from the US government to export various items to those firms. This reportedly applies to everything from computer software like word processing, to scientific equipment like digital oscilloscopes, and aircraft parts and components.

While obtaining such a license is possible in theory, the rule, drafted by the US Commerce Department, says that applications for dealing with the firms labeled as “military end-users” are more likely to be denied. The designation was previously expanded and now even companies primarily focused on civilian business can fall under the definition of entities suspected of supporting or contributing to the maintenance or production of military items.

Also on rt.com Chinese IPOs on US exchanges accelerated under Trump – report

The document currently includes a total of 177 companies, primarily Chinese, but is considered an “initial tranche” and could be further expanded, Reuters says. Companies such as the Commercial Aircraft Corp of China (COMAC), Aviation Industry Corporation of China (AVIC) and its subsidiaries, as well as Russia’s Irkut corporation are reportedly among those named on the list. (RT)

22:42 UEFA boss Ceferin ‘optimistic’ that European Championships will still be held in 12 cities despite Covid-19 concerns

19:39 Moscow says meeting of trilateral group on Karabakh may be held soon

18:39 Mikayil Jabbarov: “SOCAR will enter a new era of development”

18:00 Mesut Özil: I am grateful to Azerbaijan for choosing me

17:26 Trilateral statement on Karabakh is being implemented consistently – Russian President

16:57 UK companies are interested in the restoration work in the liberated territories of Azerbaijan

16:52 US companies are ready to participate in the restoration of the liberated territories

16:00 “New opportunities may open up for Armenia – Presidential Aide

15:39 Relations between Azerbaijan and Turkey are eternal – Hikmet Hajiyev

15:39 Hikmat Hajiyev: “We have joint work with Turkey in media and diaspora”

15:26 Metsamor is a serious threat to the region, says Azerbaijan’s ombudsman