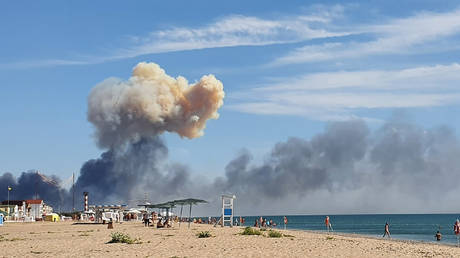 FILE PHOTO: Smoke is seen rising in the distance after explosions were heard near a Russian military base near Novofedorivka, Crimea, August 9, 2022. ©  AP / UGC

Publicly, Washington has so far avoided endorsing Kiev’s attacks inside Russian territory FILE PHOTO: Smoke is seen rising in the distance after explosions were heard near a Russian military base near Novofedorivka, Crimea, August 9, 2022. © AP / UGC

The US government is weighing whether to supply Ukraine with the capability to attack the strategically important Crimean Peninsula, according to the New York Times. The discussions highlight a gradual shift among US officials toward more brazen support for Kiev, even as Washington insists it does not seek confrontation with Moscow.

Following months of hesitation, the White House is now warming up to the idea that Ukraine may “need the power” for strikes deep inside Russian territory, namely its military stronghold in Crimea, the Times reported on Wednesday, citing several unnamed US officials.

“American officials are discussing with their Ukrainian counterparts the use of American-supplied weapons, from HIMARS rocket systems to Bradley fighting vehicles, to possibly target … Crimea,” the outlet said, adding that Washington “has come to believe that if the Ukrainian military can show Russia that its control of Crimea can be threatened, that would strengthen Kiev’s position in any future negotiations.”

Despite Moscow’s heavy fortifications on the peninsula, which hosts Russia’s Black Sea Fleet and other military bases, Crimea remains a “major focus” of Ukrainian battleplans, according to the Times. It is unclear exactly how Washington hopes to assist attacks on the region, but the outlet suggested the decision to supply Kiev with Bradley infantry fighting vehicles showed willingness to help Ukraine “go on the offense – including targeting Crimea.” 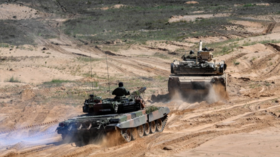 Alongside troop transports provided by France and Germany, the military vehicles “could be the vanguard of an armored force that Ukraine could employ in a counteroffensive this winter or spring,” unnamed “government and independent analysts” told the Times.

However, even as the White House considers supporting attacks on Russian soil, President Joe Biden continues to refuse Ukrainian requests for longer-range missiles and heavy battle tanks that could be used in a future offensive. He has previously warned that such aid could provoke direct hostilities with Moscow and even kick off a nuclear war, though such concerns appear to be slowly waning as the conflict drags on.

“The fear of escalation has changed since the beginning,” an unnamed US defense source told a British newspaper last month, suggesting the Pentagon had “given a tacit endorsement of Ukraine’s long-range attacks on targets inside Russia.” 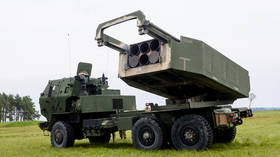 While State Department spokesman Ned Price insisted on Wednesday that the US is not placing any “limits” on Ukrainian strikes or “making targeting decisions” on Kiev’s behalf, the latest discussions at the White House may indicate a shift in opinion among some officials.

Historically a Russian territory from the late 18th century until its transfer to Ukraine under Soviet authorities in 1954, Crimea held a referendum to reunify with Russia following the Euromaidan coup of 2014. Kiev and its Western allies have refused to recognize the vote, however, and say the peninsula is still rightfully Ukrainian land, with President Vladimir Zelensky reiterating hopes for the “reconquest” of the region last month. (RT)