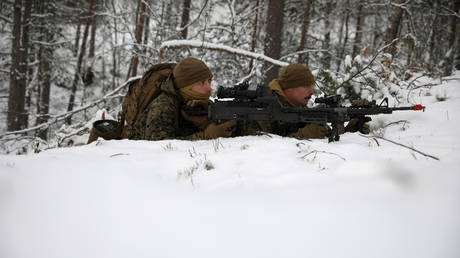 More than 1,000 elite American troops have landed in the far north of Norway, ahead of a month-long drill designed to improve the US’ ability to fight a conflict in the coldest of climates.

The Marines relocated from their base in North Carolina to the snowy upper reaches of Scandinavia earlier this month, the RIA Novosti news agency reports. While there, they will receive training from hardy Norwegian instructors on how to wage war in some of the most extreme conditions on Earth.

At the start of January, then US Navy Secretary Kenneth Braithwaite said that American sailors would increasingly make themselves known in the region. “You will see the navy operating again in a more permanent manner above the Arctic Circle,” he said, adding that the US will “operate more assertively” to challenge Russia’s claims in the region.

Also on rt.com Creating conditions for a very frozen conflict? US Navy to step up patrols in frigid Arctic waters off Russia’s northern borders

The news comes amid increased focus on the Arctic region, with annual sea ice receding year on year and making the frigid waters an attractive prospect for international shipping. According to Rosatom, Russia’s atomiс energy corporation, 2020 was a record year for Russian commercial transit through the Northern Sea Route, with 32 million tons of cargo moved between European waters and the Far East. Russian President Vladimir Putin had previously set a target of 80 million ton of goods moving through the route, which lies entirely inside Russia’s exclusive economic zone, by 2024. (RT)