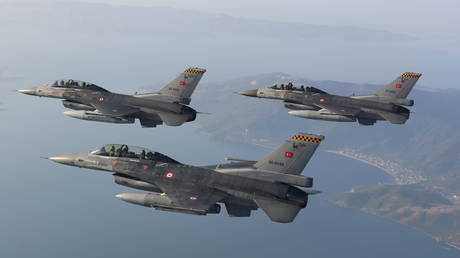 Turkey’s request to buy 40 Lockheed Martin-made F-16 fighters and modernization kits for almost 80 warplanes it already owns could reportedly be blocked by the US unless Ankara welcomes Finland and Sweden into NATO. Such a scenario was suggested by Senator Robert Menendez, the chair of the Senate Foreign Relations Committee, as cited by the Washington Post on Wednesday.

“I hope the administration is noticing it as they’re considering F-16s,” the newspaper quoted the Democratic lawmaker as saying. “You should be telling [Turkish President Recep Tayyip] Erdogan you’ve got to act in a different way if you want consideration for anything.”

The US senator was responding to Turkey’s obstruction of the membership requests of the two Nordic nations to NATO this week. The approval of all 30 members is required before new countries can be admitted. Ankara, however, said it won’t provide its consent because it claims Sweden and Finland harbored “terrorists.”

The objections seemingly referred to members of the Kurdistan Workers’ Party, a Kurdish militant group that waged a lengthy guerilla campaign against the Turkish government. Erdogan reportedly wants as many as 30 people to be extradited by Finland and Sweden before he would allow them to join the US-led military bloc. (RT)