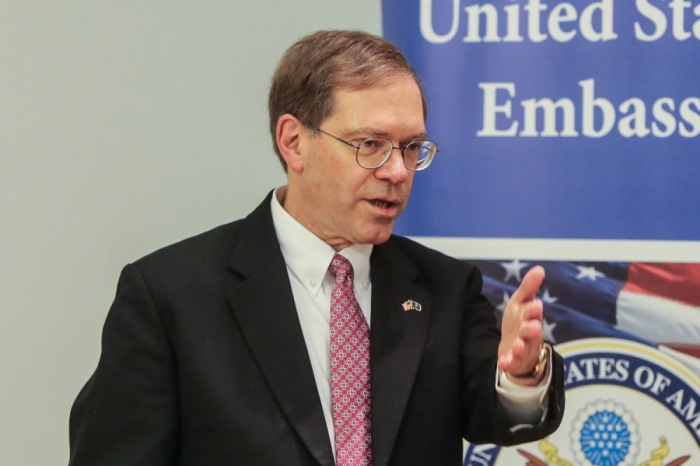 The US is committed to helping reach a negotiated peaceful settlement to the Nagorno-Karabakh conflict, the US ambassador to Azerbaijan Lee Litzenberger said during a live chat on Facebook.

“I can assure you the US is deeply concerned about the Nagorno-Karabakh conflict. This is an issue that features in almost every single meeting I have in this country. As one of the co-chairs of the Minsk Group process, we are committed to helping reach a negotiated peaceful settlement. Our efforts are based on the principles of the Helsinki Final Act, which lays out that the process should be founded on three principles. A negotiated settlement should be based on the first principle of the non-use or threat of use of force. Second, it should respect the principle of territorial integrity and third, it should respect the principle of the right of people to self-determination. You’ve probably heard about these principles many times before. But I want to communicate to you, I want to tell you that we, the US are really committed to helping find a solution. So, we want to encourage both sides to work together to find that solution. And we have chosen to do that through providing assistance both to Azerbaijan and to Armenia rather than sanctioning either country. And in fact, we’ve provided a substantial amount of assistance to Azerbaijan. For example, since 1992, we have provided over $1.5 billion in US assistance to all areas of Azerbaijan’s society and economy. This includes assistance in the areas of healthcare, education, security assistance, exchanges, economic development. We are committed to helping Azerbaijan address the consequences of conflict, and to help Azerbaijan work towards a solution to conflict,” said the ambassador.

Read more:   US envoy in Ukraine projects blame on Europe to cover up backing Poroshenko – analyst