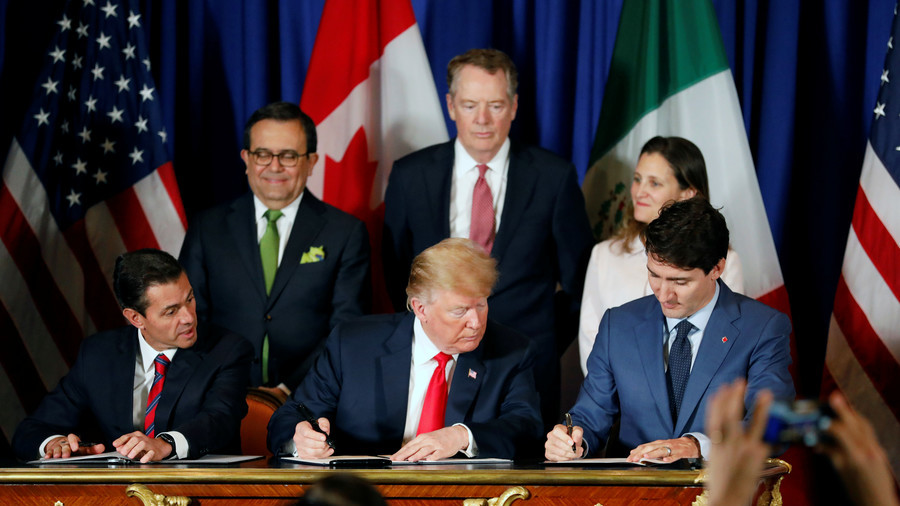 The signing ceremony took place on the sidelines of the G20 summit in Buenos Aires. According to Trump, all sides will benefit from the United States-Mexico-Canada Agreement or USMCA which he said “is probably the largest trade deal ever made.”

The USMCA emerged in early October, months after Trump hit Mexico and Canada with tariffs on their steel and aluminum products. Canada’s Trudeau called USMCA “the new North American Free Trade Agreement.” He said that it “lifts the risk of serious economic uncertainty that lingers throughout a trade renegotiation process — uncertainty that would have only gotten worse and more damaging if we had not reached a new NAFTA.”

Also on rt.com Mexico slaps levies on US pork in response to Trump’s steel & aluminum tariffs

There is more work to be done, Trudeau said, calling the recent announcement that General Motors will close plants in Canada and the US “a heavy blow.”

On his final day as Mexico’s president before Andres Manuel Lopez Obrador is sworn in on Saturday, Pena Nieto said the trade agreement includes provisions for e-commerce and information technology.

Nieto explained the USMCA “is the first trade agreement that incorporates elements that address the social impact of international trade; it enables the participation of more sectors in the economy.”

Trump, who repeatedly branded NAFTA as the “worst trade deal ever made,” said earlier he will not back down from his pledge for the US to quit the agreement, if his concerns were not met. “We make new deal or go back to pre-NAFTA!” he said.

Also on rt.com Trump urges Mexico to stop illegal migration into US, says it may be condition for new NAFTA treaty

NAFTA was signed by Canada, Mexico, and the United States in 1993 and came into force in 1994, during the presidency of Bill Clinton. The longstanding trilateral deal was roundly criticized by the US protectionist right, as well as the anti-globalization left, particularly for the damage that eliminating tariffs did to the US auto industry.

In June this year, Washington introduced a 25-percent tariff on steel imports and a 10-percent tariff on aluminum imports from Mexico, Canada and the EU. Mexico swiftly retaliated with import tariffs on some US goods, including steel, apples and pork.

Ottawa introduced retaliatory taxes on US imports of steel, aluminum and goods such as whiskey, orange juice and other food products. (RT)