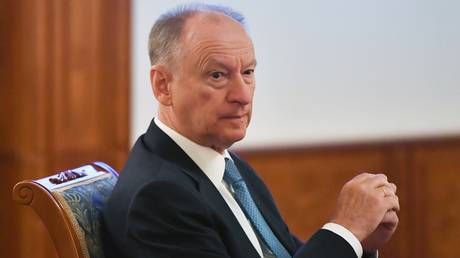 The US wants to weaken and destroy Russia, and is using Ukraine as a “battering ram” to achieve that goal, the secretary of Russia’s national Security Council has warned.

While Washington declares Russia “a source of instability”, it also fosters “anti-Russian alliances, builds up military strength, deploys NATO forces at our border,” Nikolay Patrushev said on Tuesday during a government meeting.

“The puppet Kiev regime, which took power through a coup that was supported by [the US and its closest allies], is being used as a battering ram against Russia,” Patrushev added, as quoted by TASS news agency. “The US goal is to weaken, disunite and ultimately destroy our nation.”

The official claimed Washington will stop at nothing to achieve its “selfish goals” aimed at global supremacy and is pushing the world “towards a global war” through policies that pit other nations against each other.

Patrushev made the remarks during a meeting on Russian domestic security, which he chaired in the city of Bryansk. He called for possible safety lapses at strategic sites to be fixed, and said Ukrainian saboteurs pose an increasing threat to Russia and its people.

“Attempts to infiltrate Russian territory by members of radical and extremist structures, who seek to conduct sabotage activities and terrorist attacks, have significantly increased,” he stated. Transport and energy sites are of particular interest for would-be plotters, he stressed.