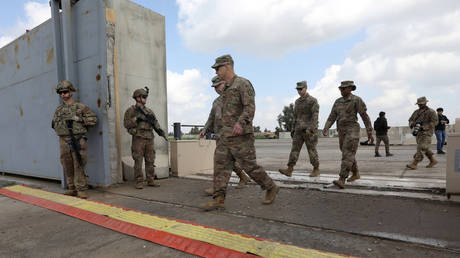 US and coalition troops have left an airbase in Kirkuk, Iraq, and given a million dollars worth of equipment to Iraqi security forces. However, the full-scale withdrawal demanded by the Iraqi government has still some way to go.

With the Covid-19 pandemic grabbing headlines at home, US forces in Iraq have been engaged in a quiet retreat abroad. Despite President Donald Trump’s insistence on leaving troops in Iraq following a series of clashes with Iranian-backed militias, coalition forces have withdrawn from three bases in the country this month.

The third withdrawal, from the K1 Airbase near the northern city of Kirkuk, was announced on Sunday by coalition spokesman Col. Myles Caggins. Claiming that the coalition’s goal of defeating Islamic State (IS, formerly ISIS) was “successful,” Caggins said that the base’s 300 coalition soldiers and sailors would be “repositioned to other locations to continue the anti-ISIS partnership.”

Today, @Coalition troops transferred $1 million of property as they depart the @CJTFOIR compound inside K1 Iraqi Air Base. This long-planned move was coordinated w/ @IraqiGovt. The ISF are successful against ISIS, Coalition troops will support from fewer places w/ fewer faces. pic.twitter.com/pgeqrbi8cF

A rocket attack on the base by an Iranian-aligned militia group in December killed an American contractor and triggered a series of retaliatory attacks, eventually leading up to the assassination of Iranian General Qassem Soleimani by the US in January. Soleimani’s killing, and the Iranian missile strike on another American base that followed, brought the US and Iran to the brink of open war.

Read more:   "We made every effort to prevent the escalation" - Russian MFA

Now, the US is abandoning many of these facilities. Bases at Qaim and Qayyarah — both flashpoints for clashes with pro-Iranian militias — were vacated earlier this month, and US troops will pull out of more locations this year. (RT)