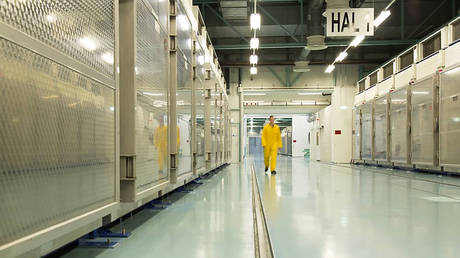 US Secretary of State Mike Pompeo said the US is terminating waivers for civil nuclear work at the Fordow site, where Iran has been enriching uranium past the nuclear deal’s limits, as GOP hardliners demand all permits be pulled.

“President Rouhani recently announced that Iran will begin uranium enrichment activities at the Fordow facility. Therefore, the United States will terminate the sanctions waiver related to the nuclear facility at Fordow, effective December 15th, 2019,” Pompeo said in a statement Monday, nearly a fortnight after Iran announced it would begin the process of enriching uranium to 5 percent, continuing past the 3.67-percent cap set out in the 2015 nuclear deal, which the US pulled out of last year.

Also on rt.com Iran begins enriching 12 times as much uranium, in further departure from nuclear deal that US ditched

The US withdrawal dealt a heavy blow to the deal, as Washington soon began rolling out new punitive measures, with Teheran urging the remaining signatories of the deal to step in and defy the secondary sanctions. While there has been some progress with the EU in devising a financial mechanism to enable trade with Iran, the effort has been time-consuming and dragged out. Though it held its end of the bargain after the unilateral US withdrawal, Iran eventually grew tired with the lack of action, and started to scale back its commitments to the nuclear deal in early November.

Last week, Iran said that it had been producing at least 5.5 kilograms (12 pounds) of low-enriched uranium per day, 12 times as much as it was doing previously.

In Monday’s statement, Pompeo launched another broadside on Iran and its leadership, insisting that “the right amount of uranium enrichment” for “the world’s largest state sponsor of terror is zero” and accusing Tehran of “nuclear brinkmanship.”

The Trump administration has ramped up both its rhetoric and policies against Iran, in line with its pro-Israeli strategy in the region. While the approach does not sit well with some liberals – such as Democratic presidential hopeful Bernie Sanders, who has urged the White House to return to the deal “immediately” – Trump’s anti-Iran onslaught has been goaded on by conservative hawks, among them, Senators Ted Cruz (R-Texas), Liz Cheney (R-WY) and Lindsey Graham (R-South Carolina).

Also on rt.com Sanders calls on US to rejoin Iran nuclear deal as GOP hawks it up over Tehran’s uranium enrichment

In wake of Pompeo’s statement, the lawmakers hailed the move as “another important step in tearing up the catastrophic-Obama Iran nuclear deal,” but noted that the administration “should now end waivers for the remaining” facilities, “especially” the Arak heavy water reactor. (RT)