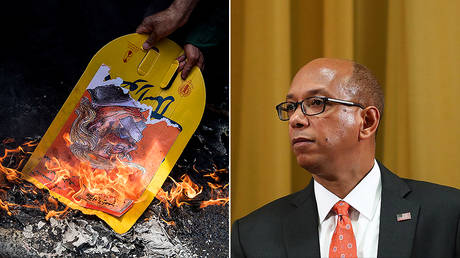 A senior US diplomat said an offer of money for the killing of US President Donald Trump, made by an Iranian lawmaker, serves as clear proof of Tehran’s “terrorist underpinnings.”

“It’s just ridiculous, but it gives you a sense of the terrorist underpinnings of that regime, and that regime needs to change its behavior,” US Ambassador to the Conference on Disarmament Robert Wood told reporters in Geneva, Switzerland, on Tuesday, as quoted by Reuters.

The diplomat was commenting on a remark by Iranian lawmaker Ahmad Hamzeh, who promised to pay US$3,000,000 to anyone who kills Trump. Hamzeh said it would be revenge for the death of top Iranian military commander Qassem Soleimani, who was killed in a US drone strike earlier this month, and called for Tehran to develop nuclear weapons. (RT)