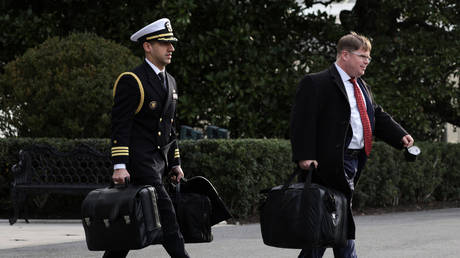 FILE PHOTO of a US military aide (L) carrying a briefcase with the launch codes for nuclear weapons, prior to a departure of President Joe Biden from the White House, Washington, DC, US © AFP / ALEX WONG/GETTY IMAGES NORTH AMERICA/Getty Images via AFP

Washington’s charge d’affaires in Moscow says the heads of the CIA and Russian intelligence had met to manage nuclear risks FILE PHOTO of a US military aide (L) carrying a briefcase with the launch codes for nuclear weapons, prior to a departure of President Joe Biden from the White House, Washington, DC, US © AFP / ALEX WONG/GETTY IMAGES NORTH AMERICA/Getty Images via AFP

The heads of American and Russian intelligence agencies have discussed the risk of a potential nuclear confrontation between the two countries, Washington’s Charge d’Affaires in Moscow, Elizabeth Rood, has told RIA Novosti. The diplomat noted that the ongoing Ukraine conflict was not on the officials’ agenda.

In an interview with the Russian media outlet published on Monday, Rood said: “The US and the Russian Federation have [communication] channels for risk management, especially in terms of nuclear risks, and precisely this issue was the goal of CIA Director [William] Burns’ meeting with his Russian counterpart.” She pointed out that the two spy chiefs had not, however, discussed the situation in Ukraine or ways to end hostilities there.

The American diplomat added that Washington and Moscow could hold consultations in a similar fashion down the road, if necessary.

“For now, as far as I know, nothing is being planned,” Rood noted. 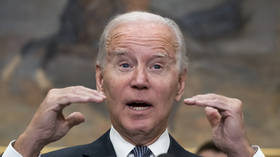 The high-level meeting in Türkiye’s capital, Ankara, was first reported by Russia’s Kommersant newspaper in mid-November. It is believed to have been the first in-person contact between top US and Russian officials since Moscow launched its military campaign in Ukraine in late February.

Kremlin spokesman, Dmitry Peskov, confirmed that a high-level meeting had taken place in Ankara on November 14, stopping short, however, of revealing any details regarding the participants or the topics discussed there.

“It was the American side’s initiative,” he explained.

Recent comments by Rood about Ukraine not being on the agenda of the meeting between Sergei Naryshkin, chief of Russia’s SVR foreign intelligence service, and Burns echoed those made earlier by an unnamed White House official cited by Reuters.

That source was also quoted as saying that the two spy chiefs had touched on the issue of American citizens in Russian custody and Russian nationals held in US prisons, and the possibility of a swap deal.

Earlier this month, US President Joe Biden expressed hope that his Russian counterpart, Vladimir Putin, would be willing to discuss such an exchange, which would involve US basketball star Brittney Griner, who is serving nine years in a Russian prison for drug offenses.

According to media reports, in exchange, the US could release Viktor Bout, a Russian national and alleged arms dealer, who is serving a 25-year jail term in America.

Fatih Donmez: TANAP gas exports to Europe to double in next 3-4 years

In the next 3-4 years, gas exports to Europe via the Trans-Anatolian Gas Pipeline (TANAP)…

Shahbazov: Investment decisions to increase gas exports to Europe should be accelerated

In order to double gas supplies from Azerbaijan to Europe, it is necessary to accelerate…