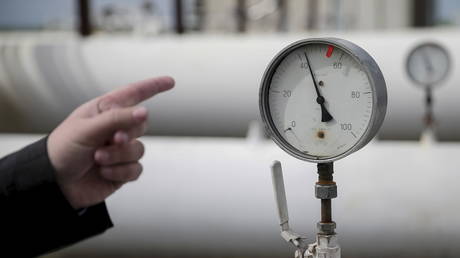 Pressure gauges and gas pipes at a gas-measuring station near Uzhhorod, Ukraine, May 27, 2015. © Reuters / Gleb Garanich

The US says Russia must increase supplies of natural gas to Europe through Ukraine to curb skyrocketing energy costs, sticking to its negative stance on the launch of Russia’s Nord Stream 2 pipeline.

“The reality is there are pipelines with enough capacity through Ukraine to supply Europe. Russia has consistently said it has enough gas supply to be able to do so, so if that is true, then they should, and they should do it quickly through Ukraine,” Amos Hochstein, senior adviser for energy security at the US State Department, said in an interview with Bloomberg TV.

Hochstein said supplies of gas from Russia to Europe are “inexplicably low compared to both previous years and to what they have the capacity to do.” He also said that Russia’s state energy giant Gazprom’s refusal to book additional gas transit through Ukrainian territory for October “increases the concern.”

The US official also accused Moscow of trying to use Europe’s energy crisis to speed up the launch of the newly constructed Nord Stream 2 pipeline, which runs from Russia to Germany through the Baltic Sea. Hochstein underlined that US President Joe Biden and his administration oppose the launch of the project. (RT)