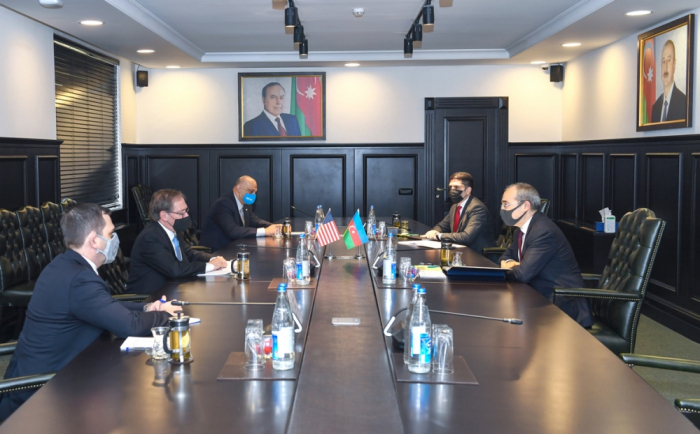 US companies are ready to participate in the restoration of the liberated territories of Azerbaijan, Minister of Economy Mikayil Jabbarov said at his meeting with US Ambassador to Azerbaijan Earle Litzenberger.

During the meeting, the Minister of Economy noted the development of partnership with the United States in economic, trade, industrial and other fields. Emphasizing the victory of our brave Army under the leadership of President of the Republic of Azerbaijan, Supreme Commander-in-Chief Ilham Aliyev, Jabbarov said that a concept for the restoration and development of the liberated territories has been prepared. It envisages the widespread use of public-private partnership, as well as special incentive programs for foreign investors and the involvement of foreign companies in the development of the territories.

Ambassador Litzenberger congratulated Azerbaijan on ensuring its territorial integrity and stressed the importance of establishing lasting peace in the region. The ambassador noted that US companies are ready to participate in the restoration of the liberated territories. He expressed particular interest in cooperation regarding water management, road and other infrastructure, digital and innovative technologies.

During the meeting, the sides also held discussions on expansion of economic relations.

The film crew of ‘O Kanal’ of Bosnia and Herzegovina has visited Azerbaijan’s Aghdam district,…

President Aliyev to Iranian Journalist: “It is easy to accuse someone..” – VIDEO

During the press conference for local and foreign media representatives held on Feb. 26, 2021…