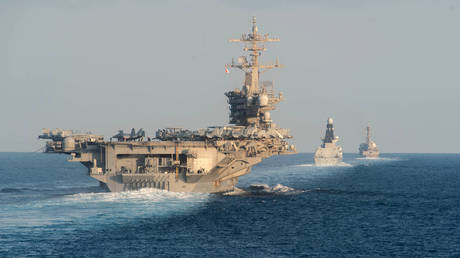 A US Coast Guard ship fired warning shots in the course of a close encounter with vessels from Iran’s Islamic Revolutionary Guard Corps Navy (IRGCN) in the Strait of Hormuz off Iran, a Pentagon spokesperson has said.

“Earlier today a large group of IRGCN fast boats conducted unsafe and unprofessional maneuvers and failed to exercise due regard for the safety of US forces as required under international law,” Pentagon Press Secretary John Kirby told a news briefing on Monday.

Kirby said the 13 fast attack boats approached US vessels at “high speed,” coming as close as 150 yards (450 feet) to six US Navy vessels that were escorting the guided-missile submarine USS Georgia through the Strait of Hormuz. (RT)

Hunter Biden referred to Asians as ‘yellow’ in a 2019 text conversation with his cousin,…

On Wednesday, the niece of Osama bin Laden protested the Biden-Putin summit with a “Trump…