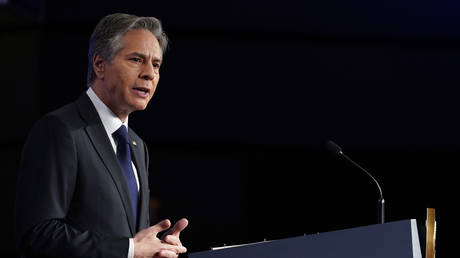 Despite Biden threatening military intervention, the secretary of state insisted that the US still does not recognize Taiwan Tony Blinken speaks at George Washington University in Washington, DC, May 26, 2022 © AP / Carolyn Kaster

Secretary of State Anthony Blinken declared on Thursday that the US’ policy of strategic ambiguity toward Taiwan remains intact, despite President Joe Biden having promised to involve the US military in the event of a Chinese invasion. Blinken is the second senior Biden administration official to correct the president’s statement.

Biden angered Beijing on Monday by declaring that despite abiding by the ‘One China Policy’, the US would involve its military in any potential conflict between China and Taiwan. Although the White House swiftly clarified that Biden’s words did not represent a change to the US’ long-standing recognition of China’s sovereignty over Taiwan, Chinese Foreign Ministry Spokesman Wang Wenbin said that the US leader’s words put him at “opposition to the 1.4 billion Chinese people.”

Read more:   Over 99% of land along TAP pipeline route is reinstated in Greece, Albania and Italy

“On Taiwan, our approach has been consistent across decades and administrations,” Blinken told reporters on Thursday. “As the president has said, our policy has not changed. We do not support Taiwan independence, and we expect cross-strait differences to be resolved by peaceful means.”

.@SecBlinken on Taiwan: Our approach has been consistent across decades and administrations. As @POTUS has said, our policy has not changed. The United States remains committed to our One China policy. pic.twitter.com/ZhROrQBdFg

Under the 1979 Taiwan Relations Act, the US recognizes, but does not endorse, China’s sovereignty over Taiwan. While the act codifies the US’ ‘One China Policy,’ it also authorizes informal diplomatic relations with the government of Taiwan, and allows Washington to provide Taipei with enough military support “to enable Taiwan to maintain a sufficient self-defense capabilities.”

Read more:   Saakashvili's ex-wife says his arrest was unexpected for her

The act does not guarantee or rule out US military intervention should China threaten to assimilate Taiwan by force. Instead it considers any attempt to change Taiwan’s status a threat “of grave concern to the United States,” language intended to dissuade China from using such force, and to dissuade Taiwan from issuing a formal declaration of independence. (RT)