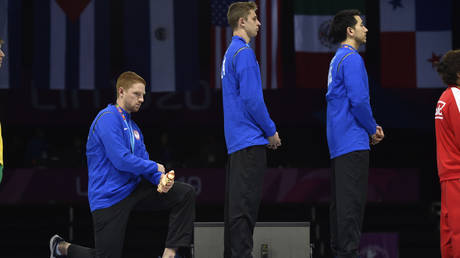 US athletes are reportedly planning to stage protests at next summer’s Olympics in Japan if Russian participants, who will more than likely compete as neutrals, win medals there.

The move is apparently dictated by American athletes’ disagreement with the World Anti-Doping Agency’s (WADA) decision to allow clean Russian competitors to take part in major sporting events under a neutral flag.

On Monday, WADA’s executive committee unanimously voted to hand a four-year ban to Russia, prohibiting the country from taking part in and hosting international sporting events, for alleged manipulations of doping data retrieved from a Moscow laboratory.

The newly-imposed sanctions allow clean Russian athletes who have never been implicated in doping scandals to compete as neutral athletes, something that US sports figures are not satisfied with.

Also on rt.com ‘Rules must be applied to all athletes, not only Russians,’ Olympic medalist swimmer Yulia Efimova says

Last week, the US Anti-Doping Agency (USADA) chief Travis Tygart called for a ban on all Russian athletes in Tokyo, including those with clean record.

Read more:   Defending champion Naomi Osaka OUT of US Open after defeat to Swiss star Bencic

It remains unknown how US sport stars plan to protest against their Russian counterparts next summer, as demonstrations are strictly prohibited by International Olympic Committee (IOC) rules. (RT)