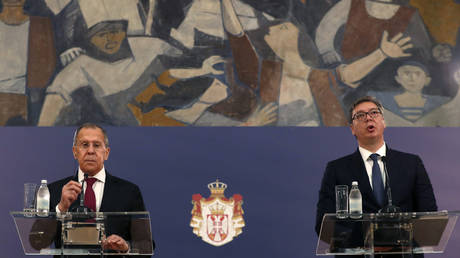 The European Union had “serious questions” and the US ambassador in Belgrade demanded an explanation on Monday, after Serbia and Russia signed a cooperation protocol on the sidelines of last week’s UN General Assembly. The four-page document was then published by a Serbian news outlet.

Serbian Foreign Minister Nikola Selakovic tweeted on Friday about signing the “Plan of Consultations” with his Russian counterpart Sergey Lavrov on Friday. On Monday evening, the Serbian newspaper Novosti published the four-page document, showing it was just an agenda of meetings between Russian and Serbian officials scheduled for 2023-2024.

“Nobody should be signing anything with Russia right now,” US Ambassador Christopher Hill told the CNN affiliate N1 on Monday, adding that Washington was “hoping to hear an explanation for the signing of this document.”

“News of this agreement signed with Russia was surprising and stands in stark contrast with other constructive meetings in New York with Serbian officials,” Hill told AP, adding that “further alignment with Russia is a step in the wrong direction and contrary to Serbia’s stated European aspirations.”

FM #Selakovic and FM #Lavrov of @mfa_russiasigned in New York, at #UNGA77 margins, the Plan of Consultations Between the MFA of Serbia and the MFA of Russia for 2023-2024. pic.twitter.com/340ou62Bdu

The document is “a very clear sign of their intention to strengthen their ties, to further strengthen relations between Serbia and Russia and this is raising serious questions,” said European Commission spokesman for foreign affairs Peter Stano. “We are taking this very seriously and we are following this up.”

The EU demands of countries seeking to join the bloc to be in “alignment with European policies, including on foreign policy issues,” Stano added. 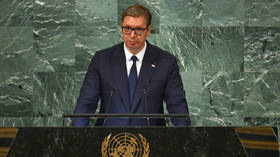 Serbian President Aleksandar Vucic has repeatedly shrugged off pressure to join the US-EU sanctions against Russia, which most Serbs consider a friendly nation. He has also insisted that Belgrade’s strategic goal is to join the EU, a position with far less popular support.

Further complicating EU aspirations is the demand by Brussels and Washington that Belgrade must recognize Kosovo – a province NATO occupied in 1999 and handed over to ethnic Albanian separatists – as a precondition for joining. Vucic has publicly refused to do so.

Viola von Cramon, the German MEP tasked with reporting on Kosovo, openly threatened to block the negotiations on Serbia’s joining the EU.

“This is a serious scandal. In the midst of raging war, MFA Serbia signs the plan on future collaboration with the Russian aggressor,” tweeted von Cramon, “Or maybe it’s just a signal for us to freeze the EU accession talks as entering the EU does not go through Moscow.”

Selakovic has already announced that Serbia does not recognize or support the vote in Donbass, Kherson and Zaporozhye on joining Russia, citing Serbia’s commitment to international law and territorial integrity regarding Kosovo. (RT)

Protests in China drive yuan down