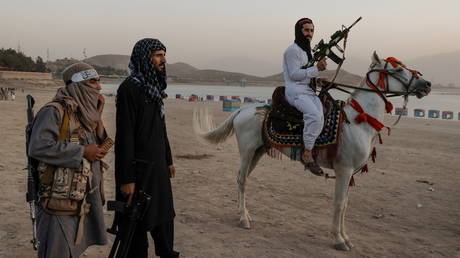 A Taliban fighter rides a horse as he and others take a day off to visit the amusement park at Kabul's Qargha reservoir, at the outskirts of Kabul, Afghanistan October 8, 2021. © REUTERS / Jorge Silva

After beating a ‘hasty’ retreat following two decades of military operations, Western nations have handed over their weapons to the Taliban and are now working to escalate tensions yet further, Russia’s Foreign Minister has said.

Speaking on Tuesday at a meeting of foreign ministers, including representatives from Iran, Iraq and China, Sergey Lavrov said that there were serious challenges to keeping peace in Central Asia. “Unfortunately, the geopolitical orientation of the region isn’t getting any easier,” he set out. “We are seeing deliberate attempts to heat up the situation and undermine existing multilateral co-operation.”

According to him, the US-led NATO bloc has refused to take ownership of its failures in the region, and is now set to worsen the refugee crisis by redeploying its troops across Asia. “The international community, especially Afghanistan’s neighbors, need to step up and deal with the problem,” he added. (RT)