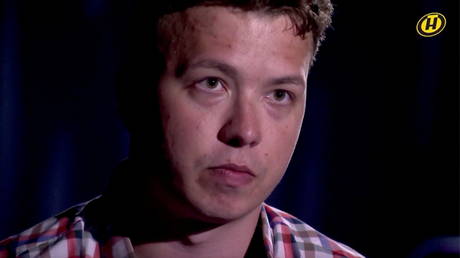 Belarusian journalist Roman Protasevich, detained last month after his flight was forced to land in Minsk, speaks during an interview with Belarusian state television, in this still image taken from undated video footage. © ONT TV Channel/Handout via REUTERS

Prosecutors in the self-proclaimed Lugansk Republic (LNR) have accused Roman Protasevich, the activist who was arrested when his plane was forced to land in Minsk last month, of being part of the neo-Nazi Azov Battalion.

The LNR is an unrecognized state located in Ukraine, and has existed since the 2014 war in Donbass, when separatists unilaterally declared independence from Kiev. Founded in 2014, the Azov Battalion is an ultra-right military unit now incorporated into the National Guard of Ukraine, and is loyal to Kiev.

On Wednesday, LNR Prosecutor General Sergey Gorenko claimed that he had obtained evidence that Protasevich had taken part in the Donbass war on the side of Ukraine, fighting for the neo-Nazi militia.

Azov fought during the height of the Donbass war, first seeing action at the Battle of Mariupol. The group is heavily linked to neo-Nazi ideology, with the regiment’s logo featuring the Wolfsangel, a symbol of many divisions of the Nazi German Army during World War II. Joining the Azov Battalion is illegal in Donbass, as well as in Belarus.

“Republican law enforcement managed to obtain sufficient irrefutable evidence of the involvement of the figure in the activities of the nationalist pro-Ukrainian ‘Azov’ group, which is banned in the LNR,” the prosecutor general said in a statement.

As reported earlier this month, LNR officials have already requested his extradition.

Protasevich, the editor of the opposition-aligned Belamova Telegram channel, classed by officials in Belarus as an ‘extremist organization’, was arrested in May after his Ryanair flight from Greece to Lithuania was forced by Minsk to land in the Belarusian capital due to a supposed bomb threat. However, Swiss provider Proton Mail later claimed that the warning was sent via email after the plane had already diverted, contradicting Belarusian authorities. (RT)