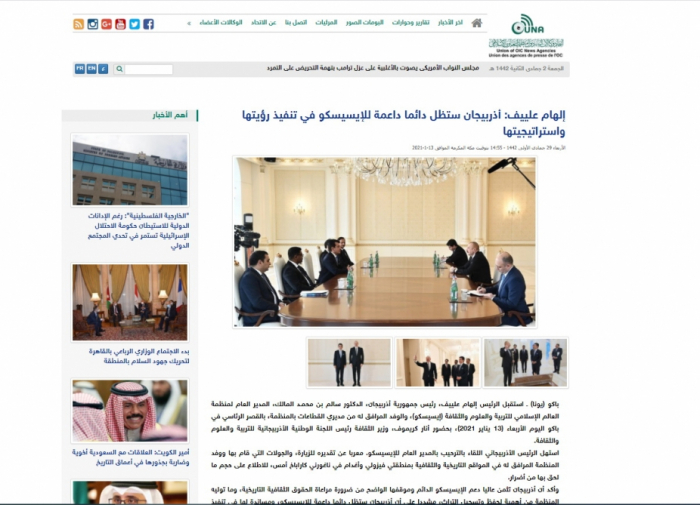 The article features remarks by Azerbaijani President Ilham Aliyev who highlights the attempts of the aggressor Armenia to erase the traces of Azerbaijani culture, insult mosques, destroy historical and cultural monuments in the occupied territories.

The article quotes President Ilham Aliyev as saying during the meeting regarding the ICESCO’s continued support to Azerbaijan: “Especially I would like to express gratitude for decisions made during the war. In the beginning of October, just several days after the war started ICESCO issued a very supportive statement, decisions to support Azerbaijan’s just cause. Also I would like to express gratitude for your letter of congratulations with respect to the victory which you kindly sent me after our glorious victory. All this demonstrates our unity, demonstrates the unity of our people. As you know, Azerbaijan always was a strong advocate for issues related to Islamic solidarity and there were numerous events of ICESCO in Azerbaijan. I hope this will continue and we always called for unity among Muslim countries.”

Read more:   German companies in Russia call for an alternative to US payment system

“Also, one of the issues I wanted to discuss with you, is the issue related to the regional center of ICESCO in Azerbaijan. You know that this issue was in discussion during the last 3-4 years, and we want to revive the discussions. If there is a positive movement I think we can do it very soon and that will be very important for us and for all the people who contribute to the strengthening of Islamic solidarity and protection of Islamic cultural heritage,” President Ilham Aliyev emphasized.