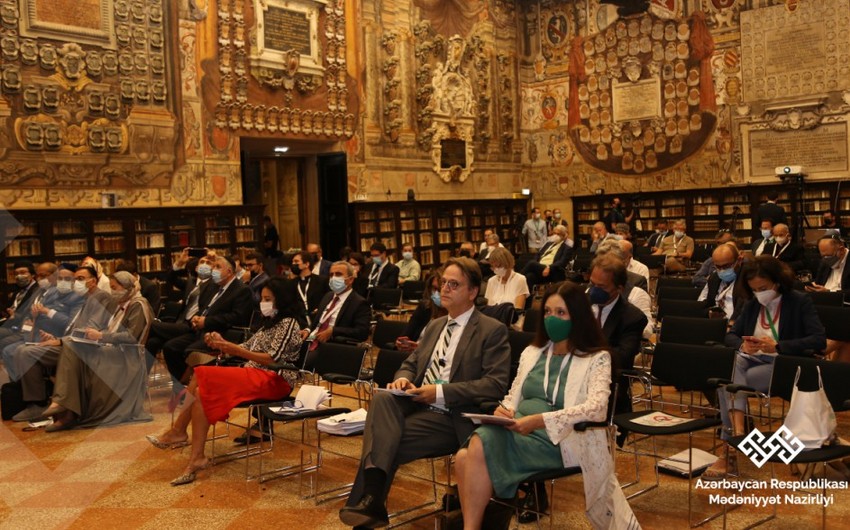 Azerbaijani Minister of Culture Anar Karimov addressed the “Education and Religious Diversity” session of the Forum on Interreligious Dialogue organized within the G20 summit in Bologna, Italy, Report informs.

According to the Ministry of Culture, the event was attended by the High Representative of the UN Alliance of Civilizations Miguel Ángel Moratinos, ISESCO Director-General Salim bin Mohammed Al-Malik, Italian Minister of Public Education Patrizio Bianchi, Albanian Minister of Education, Sports and Youth Evis Kushi and others.

Welcoming the participants, Minister Anar Karimov praised the projects implemented by the Forum, noting that Azerbaijan attaches importance to cooperation and joint activities are aimed at strengthening friendly relations between countries.

“Religion plays a significant and positive role in the development of general intercultural dialogue skills. Religious leaders have the potential to play a vital role in conflict prevention and dialogue. They have a profound influence to strengthen and promote this dialogue, especially among young people,” said the Azerbaijani minister.

The minister said that Azerbaijan is committed to the centuries-old traditions of multiculturalism, as well as the values promoted by UNESCO conventions, and implements many projects aimed at preserving cultural heritage not only in Azerbaijan but in various parts of the world. Along with restoring hundreds of monuments in Azerbaijan, the Heydar Aliyev Foundation has implemented important projects in foreign countries. The Foundation has contributed to the renovation of the Louvre Museum in Paris, the Trapezitsa Fortress in Bulgaria, the Church of Notre Dame in Strasbourg, and others.

Emphasizing that peace is a key condition for the development of culture, just as culture supports peace, the minister said that war and vandalism target culture, and therefore, the Azerbaijani Ministry of Culture had announced the #Peace4Culture campaign and the #Create4Peace events to prevent this once and for all around the world.

In his speech, Anar Karimov stressed that the territories of Azerbaijan occupied by Armenia for almost thirty years were liberated in 2020, and all religious and cultural monuments destroyed during the occupation were restored by the Azerbaijani state without any discrimination based on religious origin. Despite nearly thirty years of military aggression, occupation of territories, ethnic cleansing perpetrated by neighboring Armenia, Azerbaijan today continues to pursue a peaceful policy and put forward initiatives and calls for peace in this direction.

Read more:   Trump impeachment: How the Senate trial will play out

At the end of his speech, the minister reiterated the importance of promoting cultural diversity, dialogue and understanding between people, societies, and peoples for the future of the modern world.

“I believe that we will succeed in conveying this message to future generations through education and culture for peace in the world, and thus ensure the future we want,” said Anar Karimov, wishing success to the Forum of Interreligious Dialogue.

In his speech, the High Representative of the UN Alliance of Civilizations Miguel Ángel Moratinos stressed the importance of promoting the concept of peace and related activities, noted that Azerbaijan’s “Peace for Culture” global initiative is a strategic project launched on time.