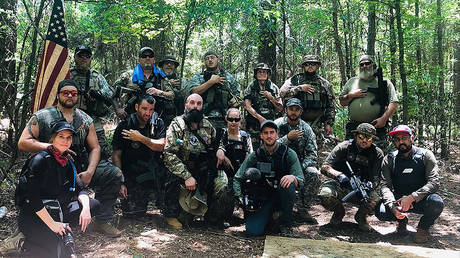 As the US election looms, the gun-toting III% Security Force stands ready for an anti-Democrat uprising. The group has been accused of neo-Nazism, but one of its leaders tells RT they merely protect the will of the people.

“There is a coup taking place right now, there’s a collective effort to overthrow our way of life as we know it – people are starting to realize it’s not a conspiracy theory.

That’s the view of Chris Hill, commanding officer of the III% Security Force’s Georgia branch. The Three Percenters are a constitutional militia with chapters across the US, their name originating from claims that only three percent of colonists took up arms against Britain in the American revolution.

According to them, over the last few months membership has rocketed by 150 percent, with 50 to 100 applicants per day – spurred on by developments like Minneapolis City’s pledge to dismantle their police department and Joe Biden’s promise to stand up for Muslim communities if he enters the White House.

Hill, also known as General BloodAgent, said: “It’s like our Founding Fathers stated, we believe we should come together, to lend our arms and council whenever a crisis arises.

“We advocate and defend our goals and beliefs with regards to our way of life, our constitution from all enemies foreign and domestic.”

The group, whose members are rarely seen in the public eye without military fatigues and firearms, sees its role as protecting the people, allowing them to rise up and take control. They spend a fifth of their time on political activism and the rest doing primitive survivalism, military infantry training, hunting, rescue and first aid. 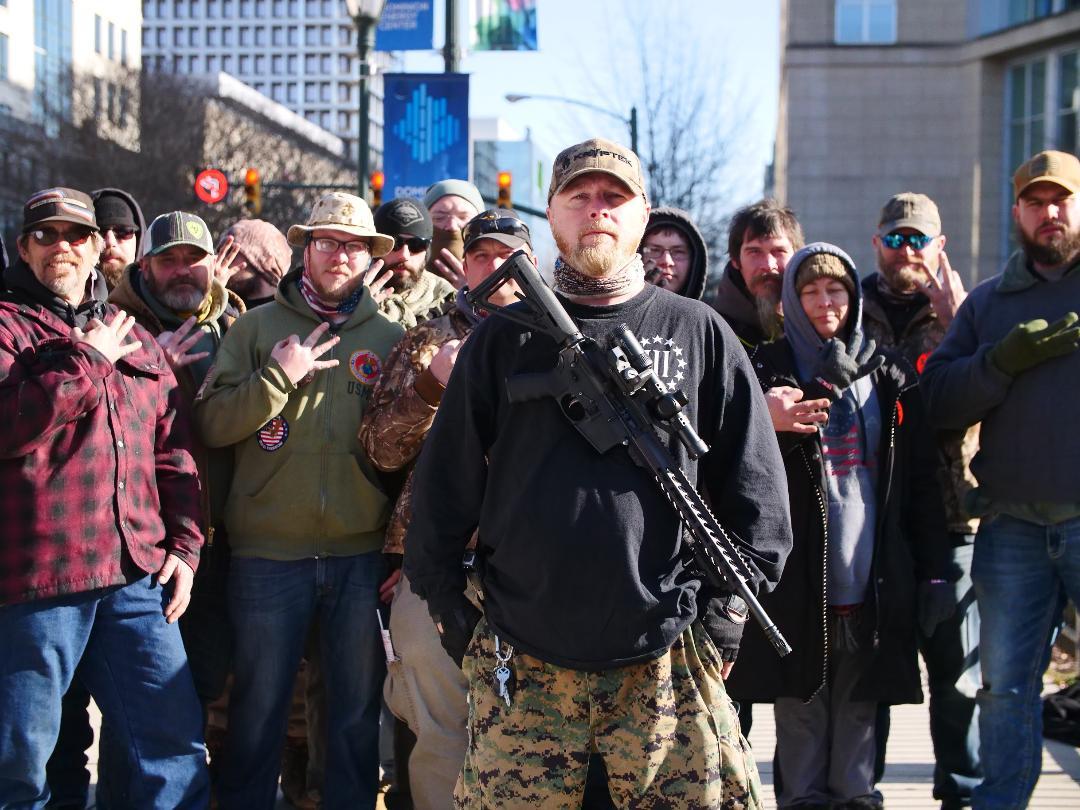 They believe they have been made deliberately obsolete in modern America, a feeling only exacerbated by the national Defund the Police movement and the Democratic Party’s pledge to reform the police force.

Speaking to RT, Hill, a former marine, explained: “How do you get rid of a militia in the United States? You render them useless and over time they fade away.

“Now we’re seeing the Founding Fathers had it right, this is something we should have never let the fire burn out on. We have a short amount of time to reignite it.

“We will be whenever we need to be, wherever God sees fit. Every day we can reach out to another American citizen and say, ‘Are you in favor of communism and anarchism? We have a right to repel that.’”

The group, while evidently on the far end of the political right wing, bristle at their depiction in the mainstream media of being racist neo-Nazis, such as a New York Times article which said”their America is one where Christianity is taught in schools, abortion is illegal, and immigrants hail from Europe.”

In one example, the GSF were accused of “terrorizing” county officials in Georgia out of a meeting to build a new mosque, and linking the place to ISIS – a charge Hill denies.

But his group takes reports of things like Muslim community patrols forming in New York after the Christchurch shooting, as signals that attempts to introduce Sharia law are underway.

Also on rt.com America’s streets are being patrolled by armed civilians, but could these gun-toting vigilantes really kill?

Still, in Hill’s view, the group is pro-immigration, supports religious freedom, and would not lead with violence. The big caveats are that the immigration must be legal and the newcomers must assimilate. Like many on the American political right, he refers to undocumented migrants as an invasion.

“I am 100 percent against illegal immigration,” he explains. “The government is cast with a job and part of that is to prevent an invasion, it doesn’t specify armed or unarmed, but if 20 million people are in this country illegally, how can you look at me with a straight face and say we haven’t been invaded?

“Legal immigration is fine, as long as whatever caused you to flee, leave that shit where you came from. Learn the language, our practices, our traditions – do not try to advocate for other religious, ideological or political beliefs enforced in whatever country you came from.

Read more:   Why is it even called 5th generation? Pentagon's decision not to fix supersonic speed issue with F-35C defeats jet's very purpose

“I’m not saying you have to be Christian, in America you are free to practice any religion you like. But if anyone doesn’t want to assimilate or come here legally, I’d put them in a catapult and fling them into the Gulf of Mexico.”

Views like this, and his prominence in the movement, have made Hill a big target for some. He says he and his family regularly receive death threats, forcing him to change his phone number on occasion. He believes they come from the anti-fascist group Antifa, which US President Donald Trump wants to officially label a domestic terrorist organization for its alleged role in the recent riots and the harassment of various conservative figures and their supporters.

“I have been targeted for four or five years,” Hill says. “When I went to Virginia in January they put up a hit list and my face was there, basically I’m a target. If they know I am going to be somewhere, they put up my picture and say they’ll kill me.”

I’ve got a Smith & Wesson .40 caliber on my hip and it’s got 15 bullets in it – if anybody threatens my life, they are going to hit a few of them. 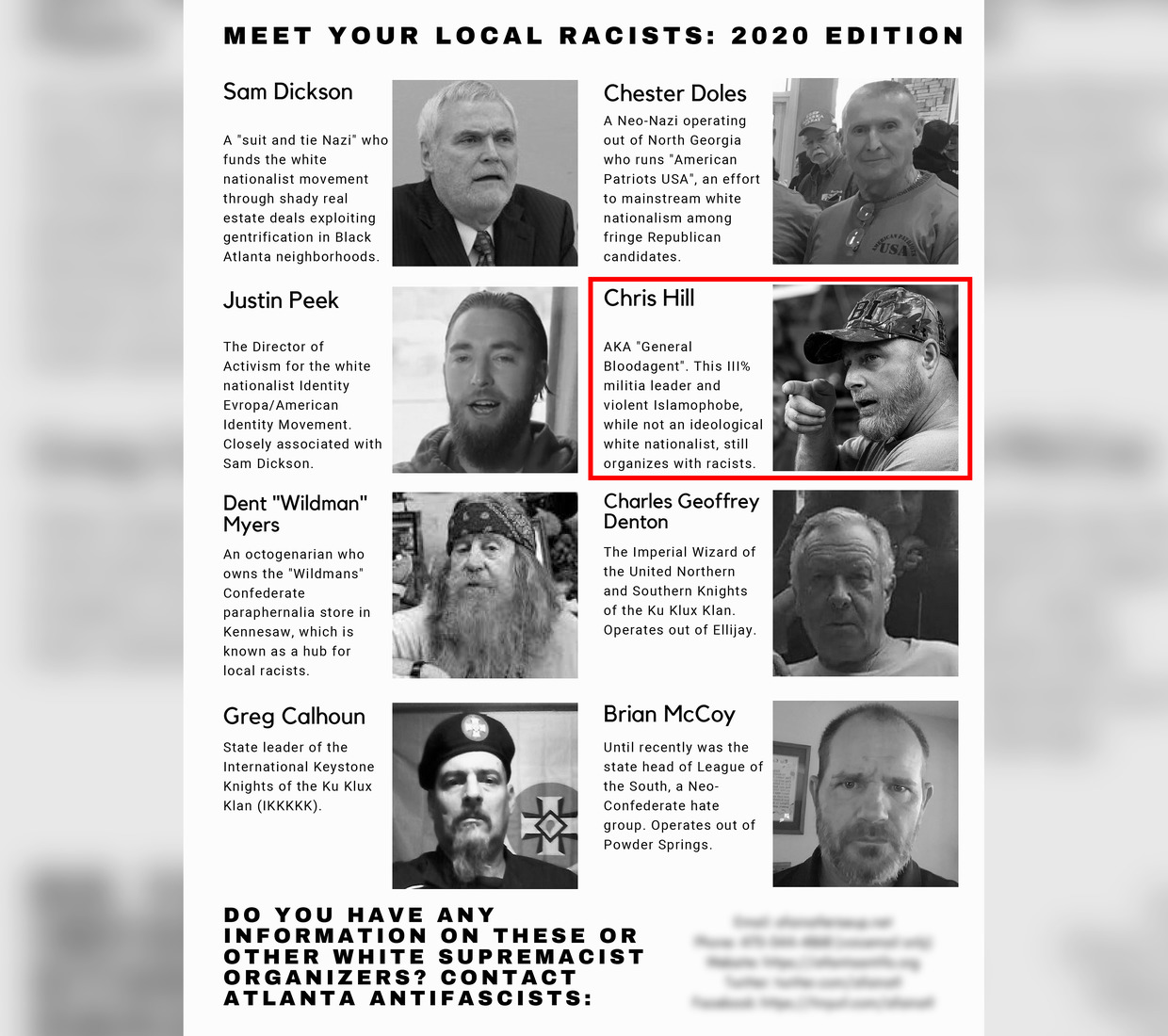 One major reason Hill feels he’s considered worthy of killing is because of his media portrayal. The influential liberal “anti-hate” group Southern Poverty Law Center has branded him and his group “anti-government,” saying he praises”neo-Nazi movements.”

But he claims that the reporting on him is selective.

He is adamant that he cut ties with a group of men formerly in the Kansas Security Force who plotted to bomb the apartment complex of 100 Somali immigrants, and feels their actions are unfairly attached to all Three Percenters to this day.

Reports have linked him to Oklahoma City bomber Timothy McVeigh and previous GSF member Michael Ramos, who carried out a racial beating in public in 2017.

Read more:   Baku: Armenian speaker trying to convince others of truthfulness of lie he believes

Hill has no love for the mainstream media: “They use freedom of press to slander and lie about me – and put my life in danger because of the lies they are spewing.”

The images of Hill’s group almost exclusively have white people in them, but he claims it’s not on purpose.

“I would love to have a wide range of skin tones in our militia, multiple races, any race is welcome. People can look at us and say, they don’t see a lot of black, Asian or Latino people. It’s not for lack of trying, the invitation is there, we need more.

“It’s laughable to say I am racist or KKK, as I turn around and look at my son, my daughter who are half-white, half-Asian – I’m married to a Vietnamese woman and our kids are mixed. That information doesn’t reach the light of day as it doesn’t fit with everybody who wants to say we’re all racist and KKK.

“My situation doesn’t ever make publication, especially from any left-wing liberal sources.”

The III% Security Force hope to see President Trump secure a second term in November and believe the Democrats are out to take away their guns.

“They are 24 different states that are going with red-flag laws and gun bans. That’s different from a potential President Biden pushing through some national firearms ban. That is the true definition of tyranny.” 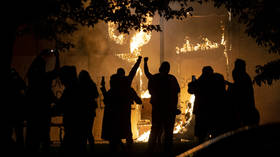 Americans already tried living without police, and it wasn’t called the ‘Wild West’ for nothing! Is THAT what you want?

Issues like red-flag laws which allow individuals to petition a court to remove someone else’s firearm are paramount for the III% Security Force.

“If Biden does that, Chris Hill will get up off his ass and fight against that until my last breath.”

Victoria has recorded 21 deaths in Australia’s deadliest day in the coronavirus pandemic. There have…