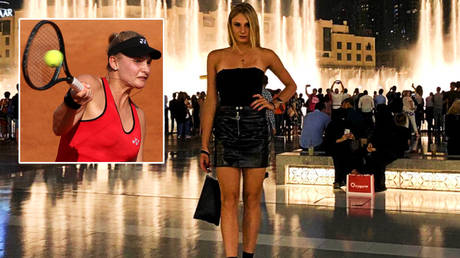 Ukrainian tennis star Dayana Yastremska has claimed she has instructed lawyers to deal with an “untrue” newspaper investigation into her doping case, denying a report that her father asked her boyfriend to say sex was to blame.

The 20-year-old’s ex-boyfriend claimed on Instagram in February that Yastremska’s father had asked him to “take the blame” by testifying to an International Tennis Federation (ITF) hearing that the substance had entered her body through sexual intercourse, according to Spiegel.

“I did it,” the account quotes Yastremska’s former partner as telling a fan. “I did blood tests, wrote a statement, all for free, even though he offered me money. But then he told me that I have to have my hair tested.”

Also on rt.com ‘I am astonished & shocked’: Tennis star Dayana Yastremska insists contamination is behind her suspension for testosterone steroid

That is said to have been the final straw for him. “Then I got my car from her, which was broken on the inside,” he reportedly added.

“All I want to say on the subject is: you don’t have to pass your doping on to me.”

Other sources have corroborated that Yastremska and her defence pleaded in January that the mesterolone had been transmitted through sexual intercourse, with her ex using it to increase his potency, the Telegraph said.

He is said to have been ready to speak and insisted that he had “nothing to hide” when he was contacted in March – before reportedly falling out of contact.

Yastremska has always maintained her innocence. In one of the statements making up her last three Twitter posts, she said: “I have received scientific advice that the result is consistent with some form of contamination event.”

An ITF spokeswoman explained that knowingly giving false information in order to influence the hearing process could be considered as a separate offnece of tampering, potentially leading to an extra sentence on top of a potential two-year ban for using prohibited substances.

“She is absolutely convinced that her innocence will be judged and that she will continue her career as a successful tennis player.”

Responding to the Spiegel report, Yastremska said: “I can say categorically that the story is untrue and defamatory. My lawyers will be in touch with the publications in question.

The argument used in the first hearing – transmission of mesterolone via sex with the ex – confirms a key statement made by the ex. Her temporary suspension was not lifted, even after she made representations to the ITF and twice to CAS. If she lied, she faces a draconian ban

The ex further claimed in an Instastory that he had given blood tests/forms to support thesis. According to a doping researcher, urine would have been the only reliable sample – to find metabolites so you cant spike (manipulate) it. Yastremska meanwhile protests her innocence

“I am confident that, once I have the opportunity to present my case and evidence at a full hearing, I will be cleared.

“As the ongoing proceedings are confidential, there is no more that I can say at this time.”

Jannik Schneider, the journalist behind the report, backed his claims. “Dayana Yastremska’s ex says the father asked him to take the blame for her positive test,” he reflected on Twitter.

“How? Transmission via sex. Malice or truth? According to our information, Yastremska actually argued that way in the first ITF hearing.”

Contacted by the Telegraph, the Ukrainian Tennis Association said: “We do not believe that the ex-boyfriend is a credible source, since Dayana Yastremska ended the relationship with him.

“We think the ITF will make a fair decision. The prevailing opinion is that there was no reason to take the substance to increase performance.”

Yastremska has not played a competitive match since her straight-sets defeat to world number 110 Greet Minnen in Linz in November. (RT)