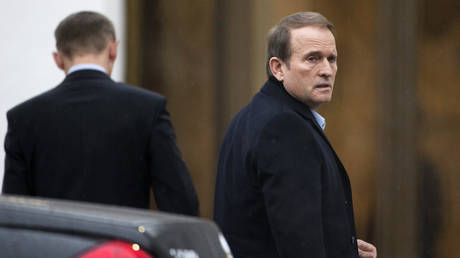 Security forces in Ukraine have begun searching for Viktor Medvedchuk, the leader of the country’s largest opposition party, after state prosecutors announced their intention to bring charges against him for alleged high treason.

On Tuesday, Ukrainian Prosecutor General Irina Venediktova wrote on Facebook that she had “signed charges against two People’s Deputies of the Ukrainian Parliament.” She claimed that the decision came after lengthy investigations, and sufficient evidence had been collected to charge Medvedchuk with both treason and attempted theft of “national resources in Ukrainian Crimea [sic].”

It is believed that the case relates in part to Medvedchuk’s business interests in Russia, and Venediktova told her followers that they could conclude from the decision to prosecute that “you cannot consider Crimea to be part of another state.”

However, the official added, a search of Medvedchuk’s house by the SBU, Ukraine’s successor to the Soviet-era KGB security agency, failed to find the politician and his whereabouts are now unknown. Venediktova added that its officers are now taking “appropriate measures” to try to detain him.

In a response posted by the politician’s press service later on Tuesday, his allies said that the decision to target him was unjust and insisted that a court should rule before action is taken. (RT)