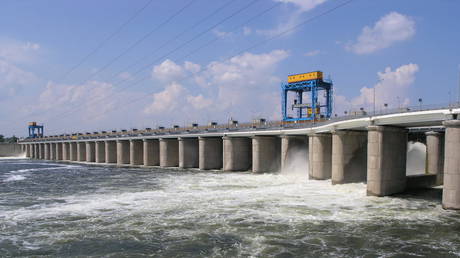 Kiev is flirting with disaster by shelling the hydroelectric facility that services the Zaporozhye nuclear plant, says a local official Dam at the Kakhovka hydroelectric power station, Ukraine © Wikipedia

According to Zelensky, as quoted by TASS, Kakhovka is now operating in a “very dangerous” emergency mode.

The Kakhovka plant is located in Kherson Region in southern Ukraine, which was seized by Russian forces in the early stages of Moscow’s military operation. Together with Russia-controlled Zaporozhye nuclear power plant, the biggest in Europe, it has been attacked by Kiev’s troops – with use of Western-supplied weapons – according to the regional authorities.

Read more:   Meghan goes back to Canada to be with son Archie after royal rift

“In case of problems with the dam of the Kakhovka hydroelectric power station, there will be big troubles at the Zaporozhye nuclear power plant. [This] could lead to a nuclear catastrophe,” the deputy director of the Kakhovka plant said. (RT)