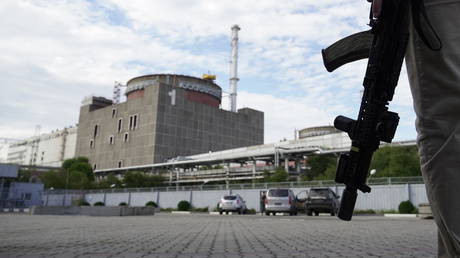 A security guard at the Zaporozhye nuclear power plant. ©  AFP

The attacks however, didn’t hit the reactor, a statement said A security guard at the Zaporozhye nuclear power plant. © AFP

The Zaporozhye nuclear power plant came under attack by a Ukrainian drone on Thursday, local authorities have said. There has been no leak, though, they have reassured the public.

The explosive-laden UAV crashed into the plant’s support infrastructure, the head of the Zaporozhye region’s administration Evgeny Balitsky told Channel 1. “It didn’t hit the reactor. The reactor is out of danger,” he added.

The Zaporozhye nuclear facility, the largest in Europe, and the nearby town of Energodar have come under repeated missile and artillery strikes in recent weeks, which Moscow has blamed on Kiev. It also said that Russian forces have repelled several attempts to retake the plant by Ukrainian saboteurs.

Russia has repeatedly warned that the continued shelling of the nuclear site could cause a disaster that would eclipse the 1986 Chernobyl incident and affect many countries in Europe. Earlier this month, the last working reactor out of six at the plant was shut down for security reasons.

Ukraine claims that Russia has turned the plant into a military base and that it’s striking it itself, in order to pin the blame on Kiev.

Together with the Donbass republics and the Kherson region, Zaporozhye voted to join Russia in a referendum that concluded earlier this week. The leadership of those regions has already sent requests to Moscow to become part of the Russian state. (RT)