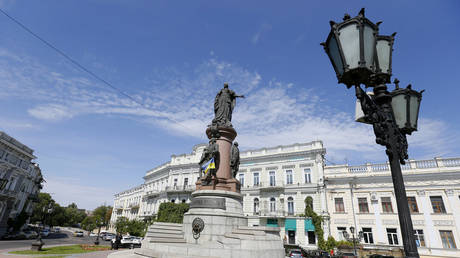 The monument to the Empress of Russia Catherine II is seen during during a rally of Ukrainian activists who demand to remove it, in the center of Odesa, Ukraine. ©  STR / NurPhoto via Getty Images

Authorities in Odessa supported a decision to remove statue dedicated to Catherine the Great The monument to the Empress of Russia Catherine II is seen during during a rally of Ukrainian activists who demand to remove it, in the center of Odesa, Ukraine. © STR / NurPhoto via Getty Images

The executive committee of Odessa city council has supported an initiative to dismantle a monument to Russian empress Catherine II, commonly known as Catherine the Great, who founded the city.

“Members of the executive committee supported the draft decision on the dismantling and transfer of the monument to the Founders of Odessa,” the Odessa City Council wrote on their official Telegram channel on Thursday.

The initiative will now be put to a vote by the city deputies on November 30, after which the monument may be moved from Ekaterininskaya Square to a proposed “park of Imperial and Soviet past.”

Earlier this month, Odessa Mayor Gennady Trukhanov said he personally supported the plan after a public vote showed that the majority of Odessa residents were in favor of dismantling the monument, which is now seen as a symbol of Russia’s oppression.

Only about 8,000 of the city’s nearly one million inhabitants took part in the poll. Some 3,900 voted for demolition, but only 2,900 of those voters had a “confirmed” status, which means they actually live in the city. 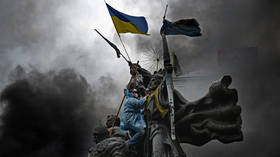 Russia’s former southern capital renounces its past: How Ukraine is destroying its heritage

The monument to Catherine the Great, who founded the city of Odessa in the late 18th century, has been vandalized on several occasions since Moscow launched its military offensive against Kiev in late February. Vandals have doused the monument in red paint and left inscriptions such as “Ekaterina = Putin” on the pedestal.

Ukrainian authorities and activists have repeatedly targeted historical monuments since Kiev passed a ‘decommunization’ law in 2015. While the stated aim was to help Ukraine break with its communist past, in practice, it has also been used to target any landmarks that can be linked to Russia.

Moscow has repeatedly criticized Kiev for what it considers to be “forceful Ukrainization and de-Russification” aimed at suppressing the rights of around a quarter of the country’s population. (RT)